German giant's compact MPV gets a mid-life makeover. Is it enough to cover the cracks? 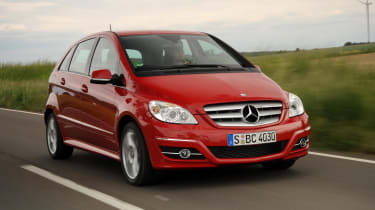 The fresh B-Class looks even more attractive than before. But once you get inside, it doesn’t feel much different to the original model, and the tweaks simply don’t go far enough. While it’s difficult to criticise the car’s quality, with so many manufacturers building more clever, versatile and dramatic compact MPVs, Mercedes needed to come up with more than just a mild update to justify the price.

You can say what you like about the limited sales success of Mercedes’B-Class. But there can be no arguing with the creative thinking behind it.

When it was launched in 2005, it was the first compact MPV ever produced by a prestige motor manufacturer, and showed the potential of this market sector. Not surprisingly, before long, other brands had followed suit.

Three years on, the German giant is set to launch a facelifted version – and bosses claim it represents a big step forward over the original. But the question is, will there be enough interest in the updated machine? Or should Mercedes have stripped the car down and started again instead?

Well, if success was judged on styling alone, the fresh B-Class would be a guaranteed hit. A meaner-looking front grille, revised bumper and modified nose all enhance the design, giving a sporty yet elegant appearance. Tall tail-lights, 17-inch, 10-spoke alloy wheels and flowing lines down the side panels complete the changes.

Inside, you would be hard-pressed to notice the differences between this and the previous car. The high seats continue to offer a good driving position and all-round visibility, there is plenty of headroom for all the occupants and three people can comfortably sit in the back, where legroom is almost on a par with the S-Class.

The boot has a modest capacity of 544 litres, but expands to 2,245 litres with the split rear seats folded. There is also an improved infotainment unit mounted in the centre console, incorporating the latest Mercedes satellite navigation unit. You can add optional extras such as DVD playback, Blue-tooth mobile phone connectivity, a dock for iPods and other devices, and a voice activation function.

A range of hi-tech safety features is fitted as standard across the range. These include adaptive brake lights, which flash repeatedly if you decelerate suddenly to warn other drivers.

In addition, a hill-start function on manual models prevents the car rolling backwards when pulling away on an incline, while there’s also an automatic light assistant. The latter turns on the headlamps when it detects the Mercedes is in a dark tunnel or under-ground car park, for example.

Buyers get the option of the new Parktronic system, too. This identifies and parks in any space you select. It’s just a shame the optional extra – which is expected to cost from £1,500 – wasn’t included as standard.

If you can wait until the autumn, Mercedes is adding its Blue Efficiency package to the B150 and B170 petrol models. This incorporates a stop-start function, which turns the engine off in traffic, and will boost the cars’ fuel economy by up to nine per cent.

Blue Efficiency won’t be offered on diesel variants – although the B180 CDI we drove is already reasonably clean, with a CO2 output of 140g/km. Its 1.8-litre turbodiesel unit is mated to a six-speed manual transmission, and delivers 109bhp and 250Nm of torque, plus 53mpg fuel economy.

As with the original B-Class, the newcomer is fun to drive. The ride is smooth and the handling impressive, although the steering can feel lifeless, especially at higher speeds.

Prices have increased. Our model is £20,850, while the range starts at £18,840 for the B150 – it used to be £17,710 – and rises to £22,540. That puts the Mercedes up against some talented and more modern competitors, including the Volkswagen Golf Plus and Mazda 5. There’s no disputing the quality on offer inside, but for the money most buyers will probably want more space and practicality.