How does the facelifted Mercedes B-Class shape up in B200 CDI diesel form? 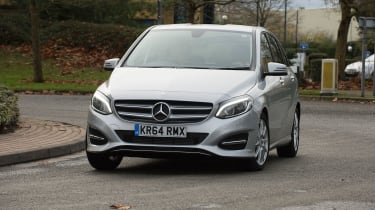 The tweaks help the B-Class keep up with newer rivals. An even more efficient B180 CDI Eco model is available, with CO2 emissions of 94g/km, but this B200 CDI is the pick of the range, with just enough power to make driving it fun. Ultimately the B-Class is about practicality, though, and in that respect it’s as good as ever.

The second-generation B-Class first went on sale in 2011, and it struck a chord with customers, selling 350,000 globally since launch. But with BMW’s new 2 Series Active Tourer recently hitting showrooms, Mercedes has rightly decided to inject some renewed appeal into its five-seat MPV.

The styling modifications are minor, and you’d be forgiven for thinking that visually the new B-Class is unchanged. There’s a tweaked front bumper with larger air intakes, as well as a wider grille and redesigned headlights. At the back, there’s another new bumper and a set of LED tail-lamps.

Inside you get the option of a bigger infotainment screen, but both that and the standard one seen here still look like they’ve been stuck to the dash as an afterthought. Quality is good, though, and as with a number of modern Mercs the gearlever’s been mounted on the steering column to free up cabin space. The dials are clear and easy to read, and a handy display shows readings such as fuel consumption and the level of charge coming from the regenerative brakes. 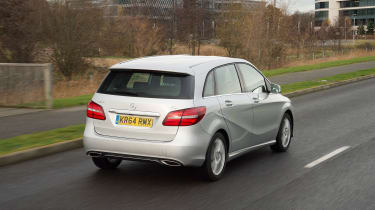 We hit UK roads to try out the B200 CDI Sport, complete with a 134bhp 2.1-litre diesel and optional seven-speed dual-clutch box. And don’t be fooled by the name; this trim gets the standard SE’s comfort suspension, which feels smooth on motorways but tends to roll in bends.

Yet while the B200 misses out on Mercedes’ clever BlueTEC engine tech (which reduces nitrogen oxide emissions but not CO2), this standard CDI will still return a claimed 70.6mpg and 107g/km when hooked up to the seven-speed auto. It does feel a bit lethargic at times, especially when you put your foot down and request a lower gear, but considering how little it’ll cost you to run, we can forgive this.

The biggest problem for this car is actually its new rival from BMW. The equivalent 218d Active Tourer is nearly a second quicker from 0-62mph, and promises similar economy and CO2 emissions of 68.9mpg and 109g/km. Even as the first-ever front-wheel-drive BMW, it’s considerably more fun to drive down a twisting back road, too. 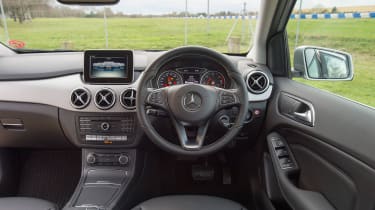 In similarly specced Sport trim with an auto box, it’ll set you back an additional £1,310, though, making the Mercedes the better-value buy. Standard kit on the B200 is good. All cars – including the basic SE – come with ARTICO artificial leather seats, as well as electric windows all round and a rear view camera. The Sport adds extra leather to the doors, soft ambient lighting and racier red needles on the dials. There’s also contrasting stitching on the gearlever and steering wheel. On the outside you’ll benefit from 17-inch alloys and chrome-tipped exhausts, but aside from that it’s business as usual.

Our car came with optional metallic paint (£575) as well as the Premium Package, which adds park assist, heated seats, Garmin sat-nav, LED headlamps and the Mirror Pack. All those will set you back an extra £1,550, which we think represents something of a bargain. 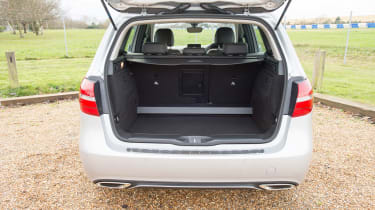 Before the 2 Series came along, the B-Class pretty much had the small premium MPV niche wrapped up. The cheaper Renault Scenic can’t match it for quality, and Ford’s C-MAX can’t compete for rock-bottom running costs. Things aren’t as clearcut now BMW has joined the party, but if you’re looking for a posh MPV with bags of badge appeal, decent practicality and an upmarket feel, the Mercedes makes a solid case for itself.