The new Mercedes B-Class offers A-Class levels of style in a more practical package, but does it live up to its potential? 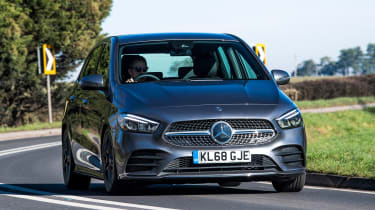 It’s a stretch to consider the Mercedes B-Class a full MPV, but if an A-Class isn’t quite roomy enough for your needs then it’s is worthy of consideration. It gets the same gorgeous tech-laden dashboard and it feels much the same to drive - including the hatchback’s slightly brittle ride. Compared to conventional MPV rivals, however, the B-Class is pricey and not as spacious.

This is the new Mercedes B-Class. Like its predecessor, it aims to offer buyers a more practical approach to three-pointed star ownership without going for a full size SUV or, Mercedes hopes, without cramping the style.

We were impressed but not blown away by the third generation model on its launch. Now it’s available to drive in the UK, and prices have been confirmed: at £30,825, this B 200 d in AMG Line trim costs £1,680 more than an equivalent A-Class.

With no other As before, the latest versions of the A and B-Class share plenty of mechanicals. The B grows 120mm longer and 129mm taller than its more conventional hatchback cousin, and while it’s over-inflated look might not be so easy on the eye, the extra space inside is what really counts. 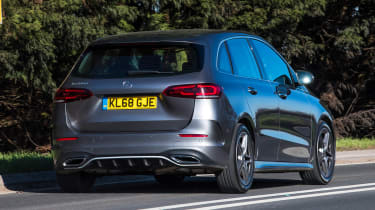 Sit in the back and the difference between the two is obvious. There’s 33mm more rear headroom than in the A-Class, but it’s the extra legroom - and foot room beneath the front seats - which make the biggest difference. It’s a perfectly comfortable place for two adults.

There are similar improvements to boot capacity, too. The 455 litres on offer is easily accessible thanks to a wide, square opening. Fold the back seats flat and the space expands to 1,530 litres. That’s 371 litres more than the A-Class, or a greater volume than the A-Class offers up when all its seats are in place.

Elsewhere inside, the pair look largely similar. The B-Class driving position is seated roughly 10cm higher than in the A-Class, which gives a slightly better view of the road ahead, but the same stunning dashboard design remains. Mercedes’s new MBUX infotainment system places two digital displays ahead of the driver, both of which offer sharp graphics and clear menu layouts.

To get the biggest screens, you’ll need to pay even more though: the 10.25-inch instrument cluster in this car comes as part of a £2,259 package, which also adds customisable ambient lighting, illuminated door sills, keyless entry and an uprated sound system.

So it’s more practical and just as posh feeling as its hatchback relation, but the increase in size has done little to compromise the drive. Unless you drove the two back-to-back, and concentrated really hard, you wouldn’t notice a difference between the way the pair behave. There’s little in the way of roll in the corners, and while it never feels really exciting, it’s stable and has plenty of grip.

The steering is extremely light around town so it’s easy to park, and while it weights up a little as the speed increases, there’s little in the way of feedback to communicate what’s going on at the front wheels. 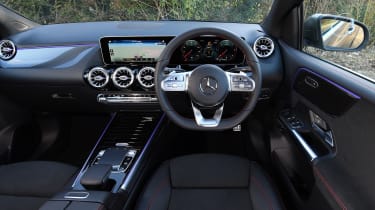 The one downside to that body control is that the ride can feel quite bouncy, particularly around town where it can crash from one bump to the next. Admittedly, there is a marginally softer setup available if you don’t go for the AMG Line trim, but considering this is a car that’s designed with rear seat passengers in mind, a slightly more relaxed setup would've made sense. The BMW 2 Series Active Tourer feels a bit more resolved on road and from behind the wheel, but it doesn’t boast the luxuries of the Merc’s cabin.

There’s not much to fault with motorway refinement: road noise, though not intrusive, is the most audible sound, because wind noise is extremely well suppressed, and the engine is barely stressed.

In this case, that engine is a 2.0-litre diesel unit with 148bhp. A sharp throttle response and a slick eight-speed automatic gearbox really feels quite lively - every bit as quick as the 8.3-second 0-62mph time suggests. It doesn't make too much fisss getting there either: while the new 1.3-litre turbocharged petrols can sound a little thrashy towards the red line, the diesel returns near-identical performance figures with much less fuss.

At 51.4mpg, it’s over 10mpg more fuel efficient than the similarly performing B 200 petrol. It’ll be slightly cheaper to tax for company car drivers too, sitting two groups lower in the Benefit In Kind ratings.