Facelifted Mercedes B-Class range includes an all-electric version - how does it stack up? 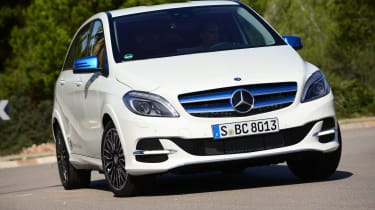 Priced at £27,000 (after the £5,000 Government EV grant), the Electric Drive is equivalent to a B 220 CDI Sport and around £1,500 dearer than the, admittedly smaller, BMW i3. While the electric version delivers a more relaxing driving experience, the diesel is obviously the more rounded choice, and the i3 is a far quirkier alternative thanks to its distinctive styling plus the carbonfibre and aluminum construction. But for those after a roomy electric car that will mostly spend its time in the city, the B-Class Electric Drive does make sense.

Putting aside the mad Mercedes SLS AMG Electric Drive, this is the first mainstream 100 per cent electric car the German giant has built. And rather than follow rival BMW’s lead in producing a bespoke car for its electric powertrain with its i3, Mercedes has decided to package up its new technology in a car that’s already on sale – namely the newly refreshed B-Class.

Don’t think the car is simply a normal B-Class with the petrol or diesel engine removed in favour of an electric motor and a battery pack, there has been some clever engineering work undertaken to make it all possible.

Like the previous B-Class, or the original A-Class from the late 1990s for that matter, the new B-Class uses a “sandwich” floor arrangement called “Energy Space”. Effectively the rear part of the floor is raised and the underfloor is lowered creating a gap. And in this gap Mercedes has slotted in the lithium-ion battery pack with only slight changes to the interior space. 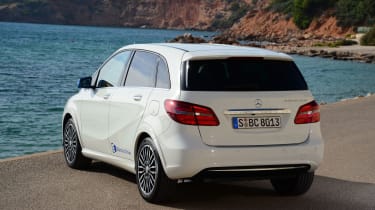 The rear bench seat – a 60:40 arrangement with a practical sliding function – now sits a tad higher than normally-aspirated B-Classes but there is still the same 486 litres on offer in the boot with the rear seats up (1,547 litres with the seats down) even though the Electric Drive does lose the standard car’s adjustable boot floor.

Visually, the B-Class Electric Drive comes in two combinations: a non-metallic white with metallic blue detailing and vice versa, although Mercedes UK is looking to widen this colour range in time. The Electric Drive also rides 40mm higher at the front and 43 mm at the rear, and wears a set of boldly-styled multi-spoke 18-inch alloys.

Inside man-made “Artico” leather with blue stitching features on the seats and the upper-part of the dash. An eight-inch (corner-to-corner) multimedia screen is home to a number of features giving useful information about the electric powertrain. 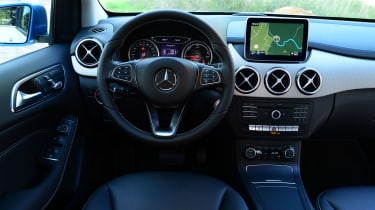 Like every other car of its type that we have driven, the B-Class Electric Drive enjoys superb torque for swift progress in the city. On the motorway, a well-insulated cabin gives a very relaxing driving experience in combination with the silent 179bhp powertrain.

It rides and steers just as well, if not better, than petrol and diesel B-Classes, with the only negative for us being that the regenerative braking could be stronger. In its most eco-friendly setting the BMW i3, for instance, has such strong regenerative braking that it’s possible to drive it without touching the brake pedal at times.

Three driving modes feature on the B-Class Electric Drive: Economy, where power is limited to 131bhp, Economy Plus, just 87bhp is on offer and the car will top out at around 70mph, and Sport which sees all the 178bhp available. 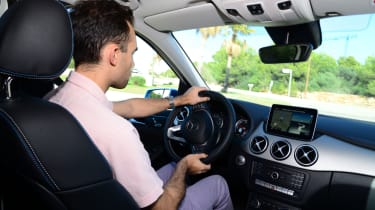 Co-developed with Tesla (although Mercedes has sold its stake in the American firm since our drive), the electric powertrain has a claimed range of around 124 miles and the B-Class Electric Drive will not be offered with a battery renting scheme.