Mercedes' muscular new two-door sets its sights on BMW’s M3 but has it got what it takes to topple the reigning class champion? 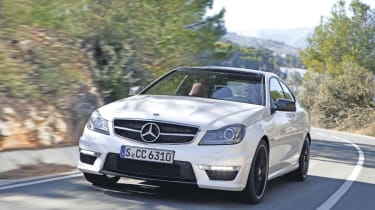 At long last Mercedes has a real challenger to the M3. With a muscular coupé body, this C63 AMG looks fantastic on the road – and inside, it’s quality too. As with all AMG products, it’s not lacking in character, thanks to that incredible V8 engine, which provides deep-chested performance and an astonishing soundtrack. The lightning-quick seven-speed automatic gearbox is also a big plus, while the entertaining handling balance and fine long-distance ability are the icing on the cake. The M3 no longer has it all its own way.

Has Mercedes finally produced a rival to the BMW M3? The firm barged its way to the top of the performance pack with the C63 AMG saloon, but now there’s this more focused coupé version, which promises to give well heeled buyers another alternative to the M3 outside of Audi’s RS5. And it certainly looks the part. There are gaping air intakes to cool down both the engine and brakes, a big power bulge on the bonnet, wide wheelarches and 18-inch alloys. LED daytime driving lights and a bold black diffuser, complete with four chrome tailpipes, complete the looks.

Inside, the cabin is suitably luxurious and sporty, with glossy piano black and carbon fibre finishes, metal trim and a steering wheel covered with Nappa leather and Alcantara suede. The star of the show, though, is the 6.2-litre V8, which drives the rear wheels via a new seven-speed automatic gearbox.

In standard trim, the C63 produces 451bhp, but there is an optional AMG Performance Package, which boosts this to 480bhp. Throttle response is instant and explosive, with 0-62mph taking only 4.5 seconds. It’s backed up by a thunderous soundtrack that ranges from a hard-edged V8 rumble under full throttle, to pops and bangs from the exhaust when you back off.

Thanks to 600Nm of torque, overtaking is just a matter of flexing your right foot, but the new gearbox can take a lot of credit – it really makes the most of the performance available by shifting very quickly indeed.

It also has a wide range of modes, including Sport+, which is so good – performing multiple downshifts while you brake heavily on the approach to a corner – that you rarely need to take over and flick the paddles on the steering wheel.

With all that power going to the rear wheels, the C63 AMG Coupé can be very tail happy, but Sport mode provides a good compromise, allowing a little slip from the back end that’s easy and fun to control.

With a pliant but firm ride, great stability and meaty steering, the C63 AMG is accomplished in corners, too. It’s not quite as sharp as an M3, but it’s still more involving to drive than the Audi RS5. And it’s a very tempting alternative to both.