The C63 AMG stuffs a powerful 6.2-litre V8 under the bonnet of Merc's smallest saloon 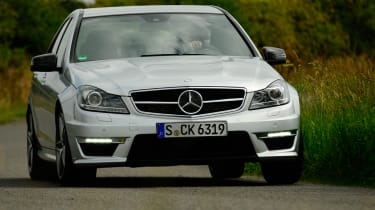 The Mercedes C63 AMG has been updated to improve on an already impressive recipe. It mixes a compact executive four-door body with a hugely powerful 6.2-litre V8, and the addition of a new seven-speed automatic gearbox only helps to boost the car's appeal. Rivals include the BMW M3 and Audi RS4, but the former is only available as a coupe, while the Audi is only sold as an estate. Therefore, the only saloon rival for the mighty Merc is the Lexus IS F, but the C63 is a far more entertaining proposition.

In terms of performance, the C63 AMG is one of the most entertaining ways of getting from A to B. The 6.2-litre V8 offers 600Nm of torque, resulting in plenty of low down grunt, which makes overtaking effortless. Add in the optional Performance Pack upgrade and power increases from a standard 457bhp to 480bhp – taking the car from 0-62mph in 4.5 seconds – three tenths of a second quicker than a BMW M3. As is the norm with German performance manufacturers, top speed is electronically limited to 155mph, but the best bit about the C63 AMG is its adaptability. Weighty steering and a sweet chassis mean it's at as at home on the motorway as it is on a windy country road, but best of all is that sweet V8 soundtrack.

The running costs on a super saloon like the C63 AMG will always be a tough pill to swallow. Both fuel economy and emissions are improved over the old model, but they're still some way from being considered frugal. That said it is better than the BMW M3, managing a respectable 280g/km and 23.5mpg (compared with 290g/km and 22.8mpg for the M3). Servicing costs shouldn’t be much more than the C-Class it's based on, but push it hard and it’ll easily tear through a set of rear tyres in less than 5,000 miles.

As with other AMG models, the C63 AMG is a wolf in sheep's clothing. The average person wouldn’t recognise it from a basic C220 CDI, but to an enthusiast it is far more than a mundane compact executive. At the front is an angular bumper LED running lights and the L-shaped headlights from the facelifted C-Class. Move rearwards you’ll notice a set of redesigned 18-inch AMG alloys, a tiny boot spoiler and a set of quad tailpipes, all of which hint at the performance of this C63. Inside, there are swathes of leather and aluminium dotted around the cabin, as well as a suede trimmed steering wheel. Alongside the BMW M3, the Mercedes is in a league of its own, with the integrated screen fitting beautifully in the centre of the dash. As you’d expect, the AMG is an enormously pleasurable place to sit.

The C63 AMG offers the exact same practicality as the C-Class it's based on. This means the same 475-litre boot and various cabin cubbyholes on offer in a base spec diesel. In the cabin the dials are clear, the controls fall neatly to hand and the dash is well laid out. Given that the BMW M3 is only available as a coupe or convertible and the new Audi RS4 will only be available in Avant estate form, so the C63 saloon's only real rival is the Lexus IS F.

The standard Mercedes C-Class has a five star Euro NCAP score and the C63 AMG will be no different. It comes with all the same airbags and safety systems, along with an extremely capable chassis, uprated brakes and stiffer anti-roll bars. In terms of reliability, Mercedes and AMG have been making cars for decades, and all now come with a comprehensive three-year warranty.