This is the all-new Mercedes C-Class, and it's better than ever - but can it match the mighty BMW 3 Series? 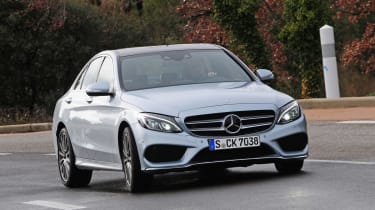 With over 2.2 million versions of the previous Mercedes C-Class sold around the world, this new model has some big shoes to fill.

The interior is the first big upgrade over the previous model. It's a lot classier than the old car and all cars get a touch-sensitive display to control the in-car functions. You can use gestures like you would on a smartphone, including pinch to zoom in on the sat-nav.

Agility control is standard on all cars too, which means the drive is improved as well. You can scroll between Eco, Comfort, Sport, Sport Plus and an Individual setting to tailor the car to how you're driving it.

This C-Class also has the option of air suspension which is about £895 and makes quite a big difference to the way that the car feels. It's a technology that's been used in the S-Class for some time and this is the first time it's been used on a car of this size. It makes the ride amazingly comfortable and although it's not exactly sporty, it's almost unmatched in its class for comfort.

The chassis is a big improvement over the previous car, too. Unfortunately a lot of the engines are actually carried over in slightly tweaked form from the previous car. While the 2-litre diesel gives 301bhp and 500Nm of torque, which means performance is pretty good, it's still noisy and rattly. That's kind of at odds with the new, more refined and luxurious cabin that you find yourself in.

The gearbox is carried over as well - it works quite well in comfort mode, it's nice and smooth, but in sport mode it sometimes doesn't know which gear to be in. That's something that doesn't happen in the 8-speed auto that you get in the BMW 3 Series.

As well as being better to drive, the C-Class is bigger than before, with loads of room up the front for driver and passenger. However in the back space isn't quite so good. The panoramic roof cuts headroom quite a bit of you're tall, and kneeroom isn't that great either.

The boot's nice and big though, at 480 litres. It's nice and rectangular in shape as well so it's easy to chuck whatever you need to in the back without worrying about it.

Thanks to its new platform and the technology that it borrows from the S-Class, as well as the improvements to the design inside and out, the new C-Class is a big step forward from the car it replaces.

However, there are still some questions about the engine refinement, even though the actual drive is superbly refined and much more like a car form the class above.

How will it fare against the BMW 3 Series? We'll have to wait and find out, but it's going to be a pretty close battle.