The new 2015 Mercedes C-Class Coupe has finally been revealed, and we've got all the details & exclusive pics 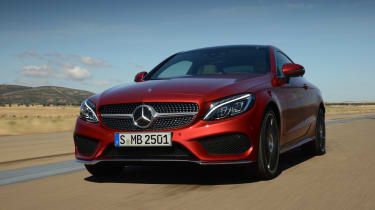 We've been seeing spyshots and teasers for months, but now Mercedes’ fresh swipe at the BMW 4 Series has gone official. This is the sleekly-styled Mercedes C-Class Coupe, due to make its European debut at the Frankfurt Motor Show in September and go on sale towards the end of 2015.

It’s the third model in Mercedes’ range of four C-Class bodystyles, which will be completed by a stylish drop-top C-Class Cabriolet version sometime in 2016. It’s clear that, like the saloon and estate, the Coupe has abandoned the square-edged look of its predecessor in favour of a softer, classier approach. 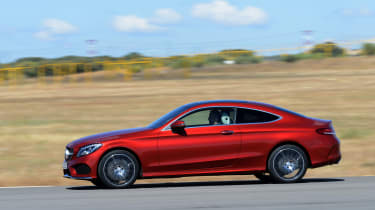 As expected, the front remains faithful to the standard C-Class, with the longer bonnet (60mm more than the previous coupe) giving it a bit of extra presence. From the steeply-raked windscreen back it’s all change, though. The front doors stretch further back on the two-door, the mirrors are free-standing and the narrow glasshouse and broad shoulder-line are familiarly athletic coupe cues.

At the back it’ll be easy to confuse the C with the bigger S-Class Coupe, thanks to the similarly sloping roofline, curvy bootlid and stretched tail-lamps. A more aggressive rear bumper completes the exterior changes. 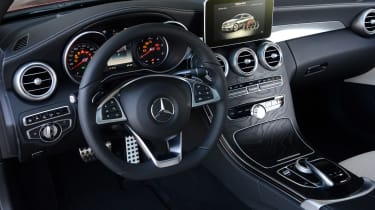 There are few surprises inside, either. The upmarket central dash design is taken almost wholesale from the saloon, and all of the controls and infotainment tech will be familiar to current Merc owners. The Coupe is 15mm lower than the saloon, and when combined with the slimmer side windows, the result is a more hunkered-down driving position. New sports seats, special colour combinations and an automatic 'belt butler’ for the front are all unique to the coupe.

The new coupe is a full 95mm longer and 40mm wider than the old one, with 80mm added to the wheelbase. That should mean extra space all-round, but judging by that roofline tall adults won’t thank you for long journeys in the back. 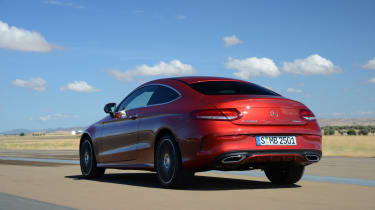 Like the rest of the C-Class range, the Coupe comes with steel springs and two-mode adaptive damping as standard. Air suspension with a five-stage Dynamic Select system is optional. There’s the same multi-link front and rear setup which, Mercedes claims, has been tweaked for extra agility without ruining the ride. 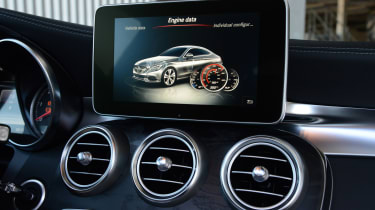 A Mercedes spokesperson confirmed there will be “something up its sleeve” for 2016, which could mean the faster C350e plug-in hybrid brought in. Of course, AMG will get a look-in with the coupe, and we’ve already spotted the twin-turbo V8-propelled C63 model out testing ahead of its launch in 2016.