Our first look at the new Mercedes C-Class Coupe, set to be revealed at Frankfurt 2015, from the passenger seat 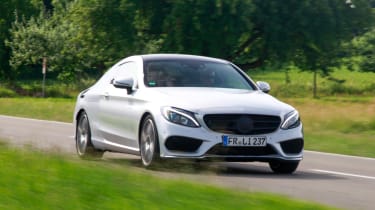 The new Mercedes C-Class Coupe promises to be one of the highlights of September’s Frankfurt Motor Show – and Auto Express has already been given an preview of the eagerly awaited two-door.

We visited Stuttgart to try out the new C-Class Coupe from the passenger seat. Various spy shots and teaser images from Mercedes have confirmed the second-generation coupe will be available in a host of different flavours. While the tyre-shredding C63 AMG Coupe will also debut at Frankfurt, it’s the more restrained C300 model powered by a 241bhp 2.0-litre four-cylinder turbo that we sampled. 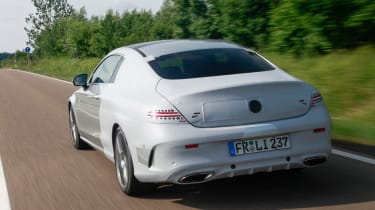 The elegance of the C-Class saloon is even more obvious in the Coupe bodystyle. There’s a whiff of the AMG GT and the S-Class Coupe about the newcomer, noticeable in the steeply angled windscreen, long, soft, tapered tail end and wide tail lights which poke out through the disguised rear end.

That plunging roofline has consequences inside, however. The Coupe remains a strict four-seater, with the middle seat from the saloon removed and replaced with a centre console. The rear seats have also been moved forward and inwards to increase head and shoulder room for those in the back. It can feel a little cosy for passengers but tat least the boot is now bigger. 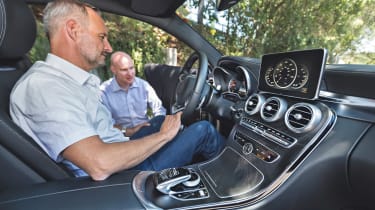 In the front, new sports seats are set 20mm lower, adding a further degree of sportiness. Closing the doors now automatically presents the seatbelts to those in the front, saving them from reaching back awkwardly over their shoulder to retrieve them, as is necessary in the current model.

The engine fires to a muted idle, with the sports exhaust providing a bassy undertone. The 241bhp 2.0-litre unit responds snappily on the driver’s commands; the seven-speed automatic switching ratios quickly, retaining the composed nature of the saloon.

The chassis is tuned differently to the four-door, too, with a fractionally shorter rear axle, while wheel sizes range from 17 to 19 inches. The sports suspension of the prototype parried the bumps well but the more that was asked of the Coupe, the more it took on the character of a sports car. 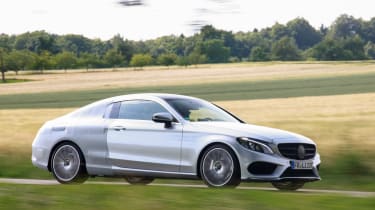 Part of that can be attributed to the weight that the new car has been able to shed thanks to the adoption of the new MRA architecture that also underpins the C-Class saloon. An official figure has yet to be revealed, but with the saloon shedding 100kg over its predecessor, a similar figure is also expected to have been trimmed from the Coupe.

We’ll have to wait until later in the year before we get behind the wheel ourselves, when pricing is also to be announced. A small premium over the saloon is a given, but undercutting rivals from BMW and Audi could be the key to success.