Mercedes latest addition to the C-Class Coupe range, but does 242bhp C300 deliver? 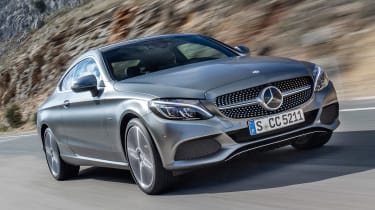 Mercedes’ new C-Class Coupé has already impressed us with its sleek styling and quality interior, but we were expecting this mid-range petrol car to be a bit more refined than it is. It’s powerful enough, yet could be quieter and smoother. We’d go for the diesel or wait for the V6-powered C 450 AMG coming later. The overall package is still super desirable, though.

We’ve already driven the diesel-powered C-Class Coupe and bonkers Mercedes-AMG C 63 S version, but what if you haven’t got £66,910 to spend on an AMG and still want petrol power? 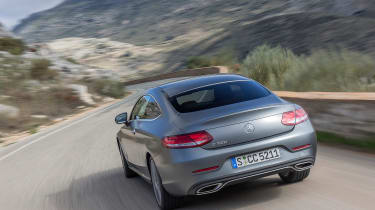 Further down the C-Class Coupe range you’ll find the C 200 and C 300. Both are powered by a 2.0-litre turbocharged four-cylinder petrol with the C 200 pushing out 181bhp and the C 300 offering a sizeable 242bhp. We drove the latter here, with the 7G-Tronic seven-speed auto gearbox.

On paper, it all looks good. Enthusiasts will lust after six-cylinder rivals, but the four-cylinder C 300 does 0-62mph in a very respectable six seconds, with top speed limited to 155mph. Fuel economy is quoted at 44.8mpg, while CO2 emissions of 154g/km mean VED isn’t too bad, either. 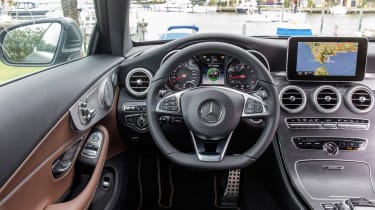 In reality, it’s not quite as satisfying as the figures suggest. The 2.0-litre engine doesn’t make a particularly pleasant noise, favouring a drone rather than a sporty sound. Press the throttle to overtake slower traffic and the noise turns harsh – made all the worse by sports exhaust. Progress is not as smooth as you’d expect, either, with power delivery suffering from a little turbo lag at lower revs.

Unusually, we’d opt for the gruffer diesel or even wait for the V6-powered C 450 AMG Sport, coming a little later next year. But while the engine falls a bit short, it’s more than made up for by the rest of the package. It’s arguably the most stylish four-seater coupé in its class, thanks to the fact it shares several distinct cues with the larger, super-exclusive S-Class Coupé. 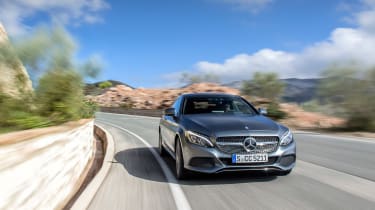 Inside, the quality and ambience are first rate. The cabin is lifted straight out of the C-Class saloon and Estate, so it’s nicely styled and beautifully made. Two passengers can squeeze into the rear and have a clear view thanks to inboard-mounted seats. The boot is slightly smaller than a BMW 4 Series’ but is well shaped.