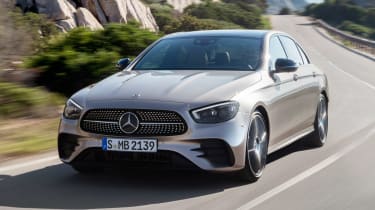 This is the new facelifted Mercedes E-Class. When UK sales begin in May, the revised BMW 5 Series and Audi A6 rival will boast reworked interior and exterior styling, updated infotainment tech, and new hybrid powertrains.

The extent of the changes are extensive by the standards of typical mid-life facelifts, made clear, most obviously, by the styling. The front end is all-new: softer, reshaped lights (LED tech is now standard, and ‘Multibeam’ LED units are optional) flank a new grille. Its shape is effectively flipped upside down compared to the outgoing E-Class, which helps it to flow more smoothly into both the bonnet above and the bumper - itself subtly reprofiled - below.

The changes towards the rear of saloon models are just as significant. In place of the previous rounded tail lights are slimmer, wider units similar to those found on the A-Class saloon. These lights extend further across the back end and into a boot lid with a slightly sharper upper edge. Revised lighting graphics aside, however, the back of the Estate looks largely the same as before. 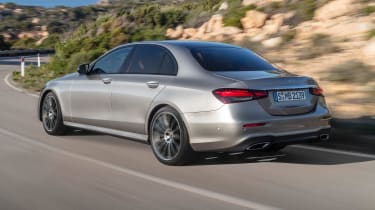 Minor details have been tweaked elsewhere: among the new range of alloy wheel designs are a set developed with aerodynamic efficiency in mind, and there are three new paint colours to choose from: High-tech Silver, Graphite Grey metallic and Mojave Silver.

Inside, the overall dashboard layout is much the same as before. A striking new steering wheel design is the big change here: the split-three spoke design features more responsive touch sensitive buttons to control functions on the digital driver’s displays.

The displays themselves are now upgraded to feature Mercedes’s latest MBUX interface, with the likes of augmented navigation directions offered on top models, and one which ditches the old car’s intuitive click wheel for a touch sensitive pad and central touchscreen. The E-Class range kicks off with a standard pair of 10.25-inch screens, while two 12.3-inch displays are available higher up the trim levels. 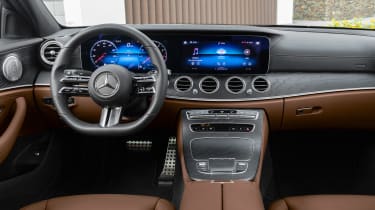 The steering wheel also helps with the suite of driver assist systems available to the E-Class driver’s disposal. While the previous semi-autonomous driving system required a wiggle of the wheel to make it clear that due attention was still being paid to the road, the new wheel is capacitive - so gripping the wheel is now enough.

Included among a wide range of driver assist systems is Active Speed Limit Assist, which adjusts the cruise control automatically according to traffic signs, bends and junctions, while traffic data sourced online will slow the car in anticipation of jams ahead, even before the driver or car’s radar can see them.

Electrification plays a big role in the overhauled E-Class engine line-up. Plug-in hybrid models are available throughout the E-Class family: petrol and diesel versions are offered in both rear- and four-wheel drive and on both saloon and estate models. 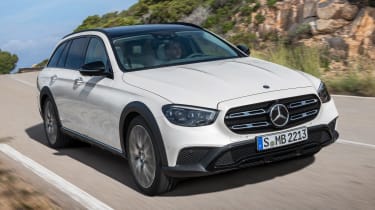 An improved generation of 48-volt mild-hybrid system is offered on a 2.0-litre four-cylinder petrol model. Now integrated within the casing of the nine-speed automatic gearbox, the new design improves packaging and reduces weight. It can produce up to 20bhp and 180Nm to reduce load (and therefore fuel usage) on the petrol engine.

A new six-cylinder petrol, previously found in the CLS 450, will be used in the E-Class for the first time, which like the four-cylinder models, benefits from a range of internal tweaks to improve fuel efficiency. Full specs are to be revealed, but Mercedes says the petrol units range from 154bhp to 362bhp, while the diesels offer between 158bhp and 326bhp.

In addition to the standard E-Class range, Mercedes has also revealed the first AMG-tweaked version of the facelifted model. The E 53 4MATIC+ once again mixes a six-cylinder petrol engine with mild hybrid power and a four-wheel drive system. 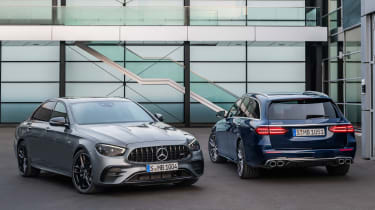 Here, the hybrid portion is slightly more potent: it offers 21bhp and 250Nm. Combined with the 3.0-litre straight-six, the E 53 makes the same 429bhp and 520Nm of torque as the outgoing version. Performance figures are still to be confirmed, but should match the 4.5 second 0-62mph time of the old version.

The E 53 4MATIC+’s styling tweaks mirror those of the rest of the range, albeit with a more hardcore appeaarance. The front gets the ‘Panamerica’ grille design first used by the AMG GT coupe, while new wheel designs measure either 19 or 20 inches. Around the back, there’s a large diffuser beneath the bumper that houses four tailpipes.

New E-Class and E 53 Prices are still to be confirmed, but first UK deliveries are due in the summer. Coupe and Cabriolet versions will follow later in the year.

Now read our review of the outgoing Mercedes E-Class. Let us know your thoughts in the comments section below…

Welcome to our Geneva Motor Show hub page, scroll down for all our Geneva content...
Visit Mercedes E 300 e vs BMW 530e 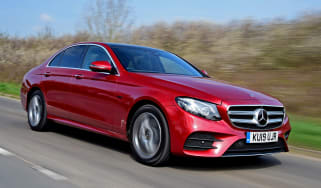 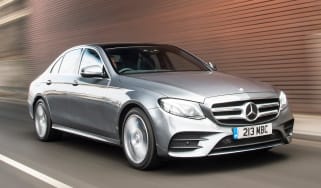