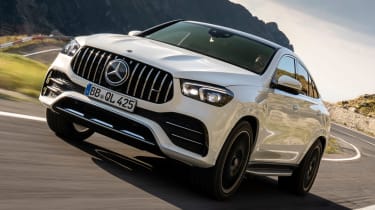 If you thought the old Mercedes GLE Coupe was a bit incongruous then you’d be right. When the third-generation M-Class was launched in 2012, a coupe version was never on the cards.

But to cash in on a growing desire among customers for more coupe-inspired SUVs, Mercedes created its first in 2015. Complete with a new badge – ‘GLE Coupe’ – it arrived with 3.0-litre V6 petrol and diesel engines, and a 5.0-litre V8 for the AMG 63 model.

The new second-generation GLE was designed from the outset to be offered both as a conventional SUV and as a coupe version. “This time around we have focused not just on the car being luxurious and spacious, but also on the way it drives. It has to drive as good as it looks,” says Mercedes’ director of SUV development, Dr. Andreas Zygan. “Feedback from our customers on the old car was that it didn’t drive the way it looked.”

The standard GLE has been on sale in the UK since the early part of 2019, but this is our first taste of the Coupe ahead of its launch later this year. So confident is Mercedes in giving the Coupe a sporting flair over the standard GLE, the firm’s execs have brought us to the Transfăgărășan Highway in Romania; a road set high in the Carpathian Mountains that’s widely considered to be the most technical of its type in Europe.

“We haven’t just taken the GLE and made a new body in white,” says Zygan, “but we have given it a 60mm shorter wheelbase compared to the standard GLE, the suspension is much stiffer and we’ve given the car our e-active body control system so it doesn’t roll around corners. There’s also a different, quicker steering rack and the gearbox ratios have been changed; they sound like little things but they add up to make the Coupe feel different from the GLE.”

We hop into a gleaming white Mercedes-AMG 53 Coupe at the bottom section of the run to the summit. At the wheel is Steffen Nowack, project leader of the Mercedes-AMG GLE, in an equally gleaming white shirt. The climb to the top is severe right from the off; the road switches back and forth whilst steeply rising, and here you need power.

The GLE 53 Coupe gets one of AMG’s new 429bhp 3.0-litre six-cylinder petrol engines with 48-volt mild-hybrid assistance, mated to four-wheel drive and a nine-speed automatic gearbox. Other Coupes are available, including a couple of diesels, but it’s the AMG that truly slingshots out of corners whilst emitting a deep six-cylinder growl for the entire run up to the top.

Nowack, an AMG man for nearly 18 years, has worked on all of Mercedes’ AMG SUVs including the bonkers V12-engined G 65, and classes the new GLE 53 Coupe as one of the firm’s finest. “We’ve really got the balance right here, between refinement and sporty handling. That’s a hard thing to do in a big SUV.”

Despite its 22-inch forged alloy wheels, the ride is on the right side of firm and the way the car changes direction is pretty remarkable. The AMG GLE Coupe gets Merc’s new e-active body control that does a stunning job at keeping the car flat through the Transfăgărășan’s faster, more flowing sections as we near the summit.

Cycling up through the driving modes unlocks an even more sporting character; more power is sent to the rear wheels and the gear changes are made with a little thump through the car. You wouldn’t confuse the GLE with a two-door coupe in the traditional sense, but it feels very far removed from a traditional five-door SUV.