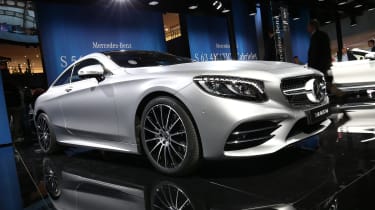 Options for the S-Class Coupe and Cabriolet include the Premium equipment line for an extra £4,995, which is only available on the S560. It comes fitted with Nappa leather, a 360-degree camera and heated seats. Another option is the £2,580 Driving Assistance package that enables more autonomy. With the Premium interior package, the Driving Assistance pack will cost just £1,695.

At September's Frankfurt Motor Show, the German manufacturer introduced a number of design tweaks and performance upgrades across the S-Class Coupe and Cabriolet ranges, with both models making their public debuts at the exhibition.

The biggest visible exterior change is the addition of Mercedes-AMG’s ‘Panamericana’ vertical slatted grille – first used on the updated AMG GT  - added to the S 63 and S 65 Coupe and Cabriolets. A three-dimensional front splitter also debuts to reduce lift at speed. 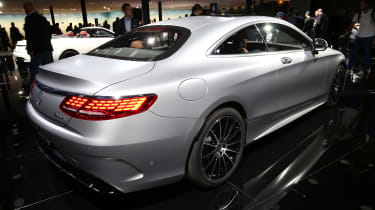 The most important revisions are under the bonnet, however. The outgoing S 500 is dropped in favour of the S 560, with a 463bhp 4.0-litre twin-turbo V8 replacing the old 4.7-litre unit. It uses cylinder deactivation tech allowing an eight per-cent improvement in efficiency. Both the hardtop or roofless S 560 manage 0-62mph in 4.6 seconds.

The AMG S 63 ditches the 5.5-litre V8 for the same 4.0-litre lump as the S 560, albeit with power boosted to 604bhp and 900Nm of torque. It also now uses Mercedes’ nine-speed automatic transmission, although the brand only quotes a 0-62mph time for the not-for-UK all-wheel drive version of 3.5 seconds. The flagship S 65 with the 6.0-litre twin-turbo V12 remains unchanged. 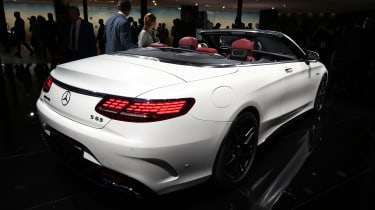 Chassis tweaks are minor, but include a more rigid subframe mount and higher wheel camber for the S 63 models, plus improvements made to the Magic Body Control system. The Race start function for AMG models has also been made easier to operate.

Inside, the digital dashboard has been updated with two new 12.3-inch screens joined together under one glass panel, like the E-Class. The driver can now view additional info on the digital instruments, too. A new, easier to use steering wheel design sees the cruise control stalk removed and replaced by wheel-mounted buttons. 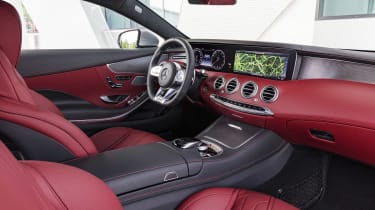 New tech includes enhanced voice control, and an ‘Energising comfort control’ system that sets up the seats, lighting, temperature and music in six programmes designed to enhance the occupants’ wellbeing. Apple CarPlay and Wireless smartphone charging also feature, while the two-door S-Classes also benefit from the same updates to the car’s autonomous driver assist systems as the 2018 S-Class saloon.

A limited-run Yellow Night edition of the S 63 Coupe will be available for a six month period at launch. It features grey or black paint combined with yellow detailing, special seven-spoke lightweight wheels, ceramic brakes, and the Aerodynamic package. The interior also gains yellow accents throughout, plus more exclusive leather upholstery.

What do you think of the new look of the Mercedes S-Class Coupe and Cabriolet? Let us know below...