We try out the top-of-the-range S-Class, the all-new fire-breathing S63 AMG 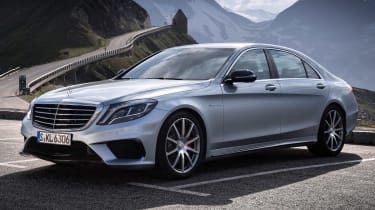 The new Mercedes S63 AMG is probably the most civilised and refined car ever to come from Mercedes special performance division. It feels less visceral and engaging than cars like the C63 AMG, but the luxury and effortless performance are in a different league. Most customers will prefer the more docile character but the high price and lack of genuine extra character means most buyers will be better served by the cheaper S500 instead.

The Mercedes S-Class has always pushed the boundaries of what’s possible and the fire-breathing new S63 AMG version is no exception. It’s the most powerful luxury saloon in the class, and the price has also ascended to a giddy new height of £119,595. However, you do get an awful lot of bang for your buck.

The familiar 5.5-litre bi-turbo V8 engine now produces 576bhp and a staggering 900Nm of torque, which is a considerable 41bhp and 100Nm more than its predecessor. Performance has increased dramatically too, with 0-62mph taking just 4.4 seconds, and if you choose the optional Driver’s Pack (£2,760) to remove the electronic limiter it will carry on to hit an impressive 186mph maximum.

Obviously putting such a savage amount of power through just the rear wheels does mean that on wet roads the S63 can struggle for traction out of tight corners, but the handling is surprisingly neutral, with tenacious grip from the front tyres on turn-in and a solid, planted feel that gives you plenty of confidence to use the engine’s remarkable firepower. Wet roads do demand a steady application of throttle though.

The variable steering takes a little getting used to though, and the extra resistance it offers in ‘Sport’ mode is a little artificial. Even so, the S63 is extremely agile for such a big and heavy car. It remains flat and composed regardless of cornering speed, but the most striking dynamic talent by far is the incredible levels of refinement.

A clever set of active exhaust valves mean that in ‘Comfort’ mode the S63 is as quiet and discreet as any other model in the range, but in ‘Sport’ and ‘Manual’ settings the flaps open and the sonorous V8 is noticeably more vocal. But when you are cruising there is almost no noise in the cabin at all – even at speeds well in excess of 80mph on the German autobahn.

Yet despite the higher cost, buyers in the UK are rather limited when it comes to choice. A packaging issue means the newly developed 4MATIC four-wheel drive version will not be sold here, and every British S63 AMG will be the full-fat 5.3-metre long wheelbase model.

However, the uncanny ‘Magic Body Control’ system – which reads the road ahead using a camera and prepares the suspension to flatten out any bumps in the road – does come as standard. The AMG also gets a bespoke MCT seven-speed automatic transmission and a lithium-ion battery that shaves a whopping 20kgs from the overall kerb weight. Carbon accessories can be specified to beef up the exterior styling too, but the visual differences are small enough that only an enthusiast will be able to tell it apart from the standard car.

Other weight saving measures include the forged lightweight 19-inch alloy wheels, a carbon fibre boot liner and even optional carbon composite brakes all-round (£7,090). Still, the S63 is hardly a stripped-out muscle car. The stunning interior has only been given a few tweaks but the sumptuous sports seats, unique AMG branded TFT digital dials and large AMG logo on the armrest all give the cabin an extra veneer of luxury - although it is worth repeating that the S-Class is already miles ahead of the competition in this regard.