The monstrous new cabriolet is based on the S 63 AMG cabriolet, and comes with 838bhp 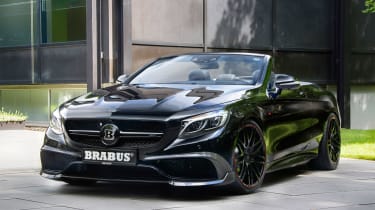 German tuning firm Brabus has unveiled its latest creation, which it claims is the fastest, most powerful convertible in the world right now. The Brabus 850 6.0 Biturbo Cabrio comes with a staggering 838bhp and has looks that could kill.

The 850 is based on the Mercedes-AMG S 63 Cabriolet, which already had 577bhp, a 0-62mph time of 4.2 seconds and a limited top speed of 155mph. The Brabus version turns all of that up to 11, so along with getting 838bhp, it manages to get to 62mph in just 3.5 seconds, and has a new limited top speed of 217mph. Brabus also says that speed is limited “due to tyre limitations”. 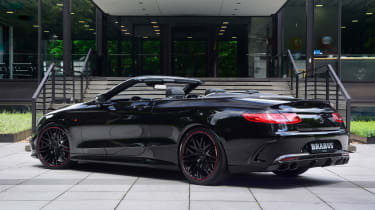 The Brabus 850 also gets four-wheel drive, so it’s better equipped to handle that ludicrous power increase and a seven-speed automatic transmission. Plus, if you’re interested, the cabrio-on-steroids still manages a claimed 27.4mpg.

Along with the Top Trumps-beating performance figures, the boffins at Brabus have heavily breathed on the S 63’s exterior design. Finished in a rather menacing black, the Brabus 850 gets a wider front grille with an integrated front splitter and a carbon fibre finish. At the back is a smoothed rear splitter, also finished in carbon fibre, and a ceramic sports exhaust system. The look is finished off with Brabus’ 21-inch black and red ‘Platinum Edition’ alloy wheels. You can go one bigger with optional 22-inch wheels if you so desire. 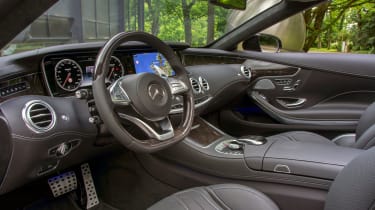 Inside, it’s all about subtle customisation. Neat details like illuminated Brabus door sills can be specified, and you can choose carbon fibre dashboard inlays instead of the usual wood trim. What Brabus prides itself on here, though, is the level of customisation of the upholstery – the brand says its “fine leather captivates not only with its practically endless variety of colors and materials, but above all with its outstanding quality of workmanship.”

Pricing has not been announced for the new super-cabriolet but, with the standard Mercedes-AMG S 63 Cabriolet starting from £134,000 and the level of customisation on offer, this Brabus version will certainly cost an awful lot more.

What do you think of the new Brabus? Let us know in the comments below!