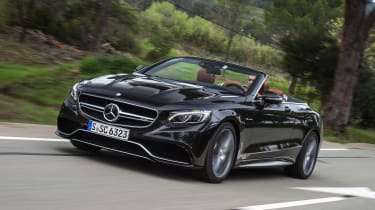 The S-Class Cabriolet was unlikely to disappoint, given the accolades achieved by its fixed-roof sibling. It looks stunning both inside and out, and continues to drive like a sports car, despite weighing an extra 85kg. We’ll have to wait until we drive it on British roads to give our definitive verdict on the UK-spec rear-drive S 63, but our four-wheel-drive taster proves the Cabriolet has lost little of the Coupe’s magic.

When we first drove it, we thought the all-new Mercedes S-Class Coupe was a very easy car to fall in love with. When you combine a gorgeous design with a beautiful interior and a sense of effortless power, it made a first-class all-rounder in the premium coupe class. It easily had the guts to take on the Bentley Continental, for example.

This time, we've grabbed the keys to the equally stunning S-Class Cabriolet, to see if lopping off the roof will add to the level of opulence.

Our first taste of the new S-Class Cabrio is Mercedes-AMG’s autobahn-storming S 63 variant – albeit fitted with 4MATIC all-wheel drive, rather than the rear-drive version we’ll get in the UK. It features a 5.5-litre bi-turbo V8 engine with 577bhp and 900Nm of torque. That’s enough to get the rear-driven model from 0-62mph in only 4.2 seconds, although the European-spec all-wheel-drive version slashes that to just 3.9 seconds. 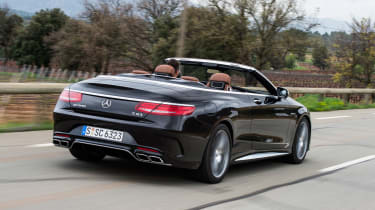 The steering is direct and the body well controlled, making this an easy car to drive at speed. It’s only 85kg heavier than the Coupe, and while the added traction of our car wasn’t truly representative of what the S 63 will feel like in the UK, on the dry roads of our test route, it stuck like glue.

The 5.5-litre V8 is lifted from the Coupe, with enough power for effortless overtaking. Mercedes also offers a less potent S 500, plus the bonkers V12 AMG S 65.

• Best luxury cars on the market

As you’d expect, the S-Class Cabriolet is remarkably refined with the roof up. Mercedes claims best-in-class noise insulation, with the electrically operated three-layer acoustic soft-top keeping it quiet on the move. The engine makes itself known under hard acceleration, and the burbling V8 is an aural sensation at full throttle. 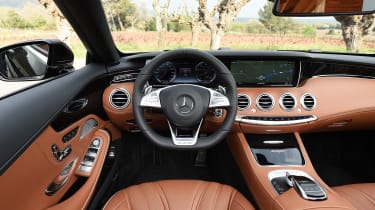 Folding the roof takes less than 20 seconds, and can be operated at speeds of up to 31mph. Mercedes’ neck-level heating is standard across the range, although the S-Class does suffer a bit of turbulence at motorway speeds, even with the electrically operated wind deflectors in place.

As a result, you’re better off crossing the continent with the lid up rather than down – and doing so allows you to soak up the S-Class’s beautiful interior. The dual 12.3-inch TFT widescreen displays come as standard, and the sumptuous seats are perfectly contoured and styled.

The S 63 builds on the S 500’s generous spec list, too, with a 13-speaker Burmester sound system and Nappa leather. You’ll also benefit from a set of 19-inch wheels, chrome details and an AMG bodykit.