New MINI to get smaller and go electric

The next-generation MINI could be electric from the start, while a reduction in size will see it match BMW’s 2001 original 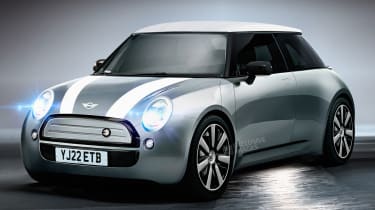 The future of the ever-popular MINI is being shaped behind closed doors right now, and brand boss Bernd Koerber has admitted that he has some very key goals in mind. He wants to shrink the car and turn it all-electric, and he wants to do it in time for the next-generation model, which will arrive early next decade.

Parent company BMW has been here before. In 2011 it revealed the Rocketman concept at the Geneva Motor Show, hinting at a future MINI city car powered by a range of three-cylinder engines. However, Koerber, who has been at the helm of MINI since last April, has made it clear that the firm’s next move will not be a straightforward resurrection of that concept. His preference is for MINI’s next-generation core hatchback to go back to the car’s original roots in terms of size and packaging.

Speaking exclusively to Auto Express at the Frankfurt Motor Show earlier this month, Koerber explained how the packaging benefits of electric drive mean that a smaller MINI will be possible once again.

“I would love to see MINI move back to the essence of clever use of space,” he told us. “That means the outer proportions on the core MINI Hatch could be reduced. I can see that happening.

“The benefit of electrification is that you don’t have to compromise on function. If you fit the battery wisely, you can go smaller but still offer functionality.” 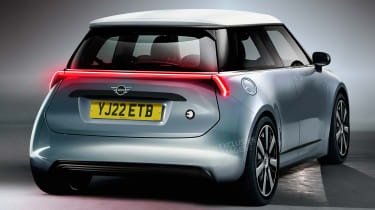 It’s now well established within the car industry that electric motors and battery packs can be packaged differently from conventional petrol or diesel powertrains. Therefore, battery-electric drivetrains lend themselves to greater interior space within a smaller vehicle footprint. That would enable MINI’s designers and engineers to come up with a smaller car without compromising on cabin space. But what’s more interesting is the timescale Koerber is suggesting.

“We are in the process at the moment of looking into how we can make something that fits specifically the requirements of the small car segment,” he told us. “We have to see in the next few months what engineering and design can come up with as a solution.”

He also explicitly confirmed that all this could be possible with the next-generation MINI hatchback, which is due around 2022.

Should MINI position itself to offer this forthcoming new car only with pure-electric power, with an emphasis on compact and cute proportions, it would join a growing pool of small, smart, design-focused electric cars, potentially shaping up as a rival for the Honda e and next-generation, all-electric Fiat 500. It’s more likely to revert to the size of the first-generation BMW MINI than the original Issigonis-designed model, and our exclusive images preview how it could look.

“In the next five to 10 years, power of choice will swing from combustion engine to electric. I would say MINI is one of the brands that will go faster and with higher priorities into electromobility,” said Koerber.

“But you will see for several more years a parallel offering of combustion engines and electric drivetrains, as well as PHEV on the Countryman,” he added. This suggests that if MINI’s engineers can successfully make the next-generation hatchback smaller and electric-only, the current car could continue to be sold alongside it to provide buyers with a full selection of powertrain options. This is a strategy Fiat will also employ when the next-generation 500 arrives.

Koerber revealed that no current BMW architecture would be able to accommodate the vehicle he has in mind, and that a new technical platform will be required if the company wants to shrink the MINI.

Last year, BMW Group and Chinese manufacturer Great Wall committed to a joint venture that will see brand-new all-electric vehicles built for each company at a newly constructed factory in Jiangsu Province, China. However, the MINI boss would not be drawn on speculation that Chinese technology would underpin the forthcoming new vehicle.

He did, however, suggest that a high-performance John Cooper Works (JCW) version of the next MINI would remain on the cards, even if it goes fully electric.

“We have to go and define JCW in an electrified context and era. But that’s possible, there’s no problem, no contradiction,” Koerber suggested.

Do you like the look of our exclusive new MINI images? Let us know your thoughts below...