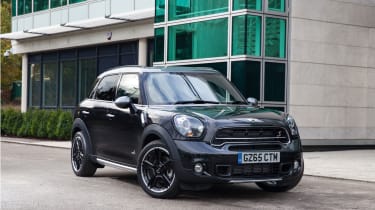 The Countryman has been somewhat of an unlikely success for MINI - but there's no escaping the fact that despite only being five years old, it's due an update soon to bring it in line with the rest of the updated MINI range. Still, that hasn't stopped the BMW-owned brand from introducing another limited-production edition to convince punters it's an appealing buy - and this is it, the Countryman Special Edition.

The Special Edition is along the same line as the MINI Countryman Park Lane and Countryman Business Edition - adding styling tweaks and extra kit to woo potential buyers. Unfortunately though, the Special Edition doesn't seem to add much in the way of desirable goodies. Instead of a wacky, stand-out paint job, customers are treated to black paint, with a Metallic 'Space Grey' roof and mirror caps. Black alloys also feature.

Inside, the seats are covered with Gravity-Carbon black leather, and the dash has piano black interior trim. If you're sensing a theme here, you'd be right.

There's some welcome colour on the equipment list, even if it is only 'Blue'tooth phone connectivity - but the generous kit list also includes sat-nav, voice control, heated front seats, climate control and xenon headlights. However, MINI haven't released a price for the Countryman Special Edition - so it's impossible to tell whether this is good value or not when compared to the standard car.

Obviously, customers opting for a special edition MINI wouldn't make do with one of the meagre, lower-powered engines, so the Countryman Special Edition is available in either Cooper S or Cooper SD form - that's either a 1.6-litre petrol engine with 188bhp, or a 2.0-litre diesel with 143bhp. Both models have ALL4 four-wheel-drive for the occasional foray down a farm track, and a choice of automatic or manual gearboxes.

Only 250 examples of the MINI Countryman Special Edition will be released, and it's available to order now.

Could the Countryman Special Edition tempt you into MINI ownership? Let us know in the comments...