MINI's new drop top is here. Can it deliver the driving thrills we've come to expect? 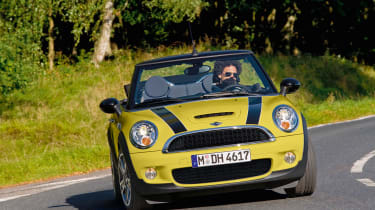 The MINI has become more than just a car – nowadays it’s a fashion item too. And the Convertible is always going to be high on any style-conscious driver's shopping list. There are compromises to be made in terms of handling and ride comfort when the going gets rough – but for the most part customers will be hard pushed to tell the dynamic differences between the drop-top and fixed-roof versions. We’d go for the Cooper S – it’s worth the extra money for the raucous exhaust note alone.

The MINI range isn’t so mini anymore! We’ve already driven the hatchback and Clubman variants in One, Cooper, Cooper S and Cooper D trims, as well as the fire-breathing 208bhp John Cooper Works – and now the new-generation model has lost its roof too. So does the newcomer deliver the classic MINI driving experience, or is the canvas roof a compromise too far?

The body structure, floorplan, A-pillars and side sills have all been stiffened over the first generation convertible, as well as being 10kg lighter, but unfortunately it still displays the same problem. In smooth sweeping bends it has all the balance and grip of the hatchback, but show it a less-than-perfect surface and it suffers from a terrible case of the shakes – the wheel writhes in your hands and harsh shockwaves reverberate through the chassis.

However, this has always been the compromise with convertibles, and luckily it doesn’t ruin the driving experience entirely. The turbocharged engine is an absolute peach, revving eagerly and smoothly all the way to the red line, with a rasping exhaust note that makes it sound more like a touring car than a hot hatch – something you can enjoy all the more with the roof stowed.

The steering, brakes and six-speed manual ‘box all have the solid, well-engineered feel about them we’ve come to expect from MINI, so despite the chassis’ shortcomings its still possible to make devastatingly quick progress on the right roads – and have serious amounts of fun while you doing it.

The fabric roof can be raised or lowered in 15 seconds and up to speeds of 20mph, but still folds rather messily behind the new pop-up roll hoops. Alternatively it can be retracted 40 centimetres to create a full-width sunroof. And that's not all, a new optional gadget caled the Openometer records the time you've spent with the roof down - so you can guage your 'visual coolness' via a large dial attached to the tachometer... A gimmick too far perhaps.

There’s a price to pay for wind-in-the-hair thrills though – practicality suffers badly. Rear legroom is compromised – you’re unlikely to squeeze anybody in behind a six-foot driver – and the boot offers just 125-litres of room when the hood’s down, enough for a pair of overnight bags.

But if you’re in the market for a fashionable car like this, load-carrying ability probably won’t be too high on your list of priorities. In which case the new MINI Convertible has achieved what it set out to do. Its lack of structural rigidity can be felt on rutted roads, but it’s a huge improvement over its even-wobblier predecessor and it offers style and desirability very few cars can match.

Click here to see a video feature of the new MINI in the metal!