Tuned version of the British-built supermini proves worth the wait as it serves up a thrilling drive. 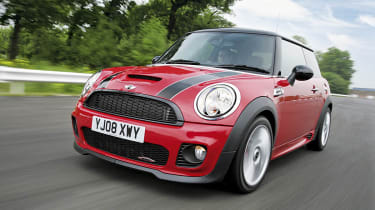 Far from exposing any chinks in the armour of the current MINI’s chassis, putting more power under the bonnet only helps to underline its amazing character. It’s one of those cars that works absolutely perfectly, where you can point and squirt your way through fast corners, and have fun looking for more. It’s an absolute gem.

It's MINI’s take on snap, crackle and pop – the MINI John Cooper Works is a hot hatch that the maker says will eat its rivals for breakfast!

The firm proudly points out that 160mph is the biggest number ever to appear on the speedometer of a production MINI, and with a top speed of 148mph, the new model is one of the fastest hot hatches money can buy.

But the Rice Krispies reference which has been adopted for the launch of this performance flagship describes more than straight-line speed.

The most obvious element is the exhaust note, which crackles at idle and is peppered with pops and bangs.

But more than that, the JCW’s snappy responses mean you won’t need to spend long behind the wheel to realise this is more a thinly disguised race car than anything else.

This isn’t surprising, because many of the parts that make this machine so exciting come from the off-the-shelf MINI Challenge one-make racers.

The latter car’s torque output is identical, too, with a maximum of 280Nm available from an ‘overboost’ function. The racer only shades the showroom model’s 148mph top speed by 1mph, and beats it from 0-62mph by a whisker – 6.1 seconds versus the 6.2-second figure for the JCW. There’s a track-inspired look for the road car, too, with unique 17-inch alloy wheels, a black honeycomb grille, and chunky bodykit including a rear roof spoiler.

On the road, straight-line performance is astonishing, while the engine’s responses are absolutely sensational, right across the rev range.

But a MINI wouldn’t be a MINI if fast was all it did. And the newcomer handles like a racer, too – with the help of a lot of technology.

That includes switchable traction control, which can be left on for maximum stability or turned off partially for more wheelspin. You can also completely deactivate it, if you don’t mind the front wheels scrabbling to put power down on wet surfaces. But, even if you do that, the new Electronic Differential Lock Control will kick in to make the most of the grip available. This, combined with quick, accurate and decisive steering means the JCW is the purest driver’s car yet from MINI.

It also has the biggest brakes ever seen on a production MINI, with four-piston Brembos on the front and a combination of stopping power and rock-solid feel that again wouldn’t disgrace the race car. There’s no doubt it all works brilliantly together.

Amazingly, despite the race-inspired chassis, the MINI is reasonably comfortable – unlike some rivals, the hatch won’t loosen your fillings over rough surfaces.

Throw in a great interior with a leather-trimmed steering wheel, piano-black dash trim, sports seats and air-con, and here’s a MINI with a bit of taste as well as a strong racing flavour.