Is the facelifted MINI Cooper D good enough to take on the Audi A1? We find out. 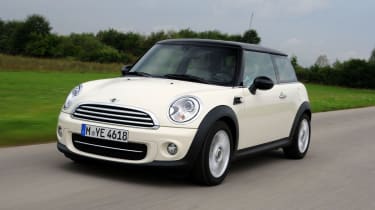 The new engine is a step forward, on paper at least, while the design tweaks signify that MINI has at least made an effort to counter the arrival of the Audi A1. But what’s significant is that when the newcomer launches later this year, the diesel engine will be available in the full range of One and Cooper hatches and Convertible for the first time, giving buyers who crave an oil burning supermini plenty of ways to spend their cash. And that’s before they’ve even looked at the comprehensive options list...

It’s a MINI facelift! For the first time, the baby Brit’s reign at the top of the premium supermini tree is under threat. Audi is about to launch its new A1 right into the same market that MINI has had to itself since 2001.

But the funky city car isn’t going to go down without a fight, and the firm has just given its entire range a refresh before battle commences. Auto Express is first behind the wheel to see if the subtle tweaks are enough to keep the MINI at the top spot.

Even the most ardent fan will struggle to pick out the revised model. There’s a new front bumper which is a little more prominent to meet more stringent pedestrian impact legislation, while are the rear, all models now benefit from LED taillights. The designers have also included black trim elements at the front and rear to make the car appear wider than before, enhancing its stance. MINI has also added new colours and alloy wheels for customers to further personalise their cars.

On the inside, it’s a similar story, with a small number of changes being made to what is an already impressive cabin. As well as updating the colour and trim options, the firm has improved the air conditioning controls to make them easier to use.

The biggest change is under the bonnet. Sales of MINI diesels are soaring, so the firm has elected to replace the oil burner it co-developed with PSA, with its own unit. The engine is essentially the same as the 2.0-litre diesel used in the BMW 116d and 118d. However, the firm has reduced the capacity to 1.6-litres and reengineered to be mounted transversely in the MINI, rather than longitudinally in the 1-Series.

The numbers are remarkably similar too. Both new and old engines muster 110bhp, but the new unit produces 30Nm more torque, at 270Nm. The 0-62mph time is cut from 9.9 seconds to 9.7 seconds too. But the most important news is that the new oil burner is cleaner. It returns 74.3mpg, instead of 72.4mpg on the combined cycle, and sneaks into the free road tax bracket, emitting 99g/km instead of 104g/km.

On the road, you’d be hard pressed to notice anything has changed. The new unit is very smooth and responsive, just like the old one. The same firm riding but great handling MINI trademarks are there too. In fact, the cars are so similar you’d have to drive an old and new Cooper D back-to-back to tell any real difference.