We drive the latest special edition from MINI, which marks the Olympic Games with a patriotic special 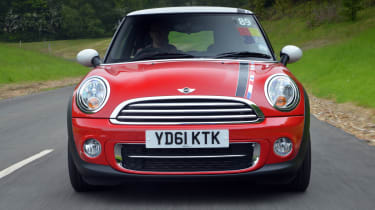 If you want a MINI Hatch that’s unashamedly patriotic and a little more exclusive than your average model,  the London 2012 Edition is for you. While some of the bodywork stickers look a little cheap, the interior is classy. But as it costs over £1,000 more than a regular Cooper D with a similar spec, you’ll really have to value the exclusivity.

As one of the official partners of the Olympic Games, MINI has launched its London 2012 limited-edition hatchback models, including the Cooper D model driven here.
You can buy a London 2012 Edition in any colour from the Union Jack – Chili Red, White Silver or Lightning Blue – but only 2,012 cars will be made.
Our red test car had white mirror caps, a white roof with the London 2012 logo and a Union Jack stripe along the bonnet, roof and rear hatch – just like the rest of the Olympic editions.
It all helps the car to stand out, but some of the stickers look a little cheap. Thankfully, a set of 17-inch Ferris Grey Conical Spoke alloy wheels rounds off the exterior changes nicely.

Inside, there’s a numbered plaque on the dashboard with a London skyline, while the leather seats have Union Jack piping around the headrests. However, as with other MINI hatchbacks, there’s not much space for adults in the two rear seats and the small boot is hampered by a high lip.
On the road, it’s more of what we’ve come to expect from MINI, as no changes have been made to the car’s power, chassis or handling. The quick, accurate steering and small dimensions make it lots of fun in corners and easy to park.
With 110bhp from the 1.6-litre diesel, the car goes from 0-62mph in 9.7 seconds and the six gears help keep the revs down on the motorway. Stop-start is fitted as standard, ensuring that CO2 emissions are pegged back to a road tax-exempt 99g/km. The frugal 1.6-litre diesel has plenty of mid-range punch, yet still
returns 74.3mpg economy.
The MINI Cooper D London 2012 Edition costs £19,260, which is about £2,500 more than a standard Cooper D.
Specify the same level of kit – including leather seats and 17-inch alloys – and this Olympic special still ends up costing around £1,000 more than the standard car, which is quite a sum of money for a bit of extra exclusivity.
Share this on TwitterShare this on FacebookEmail