The i is clever and funky, but its steep list price counts against it. 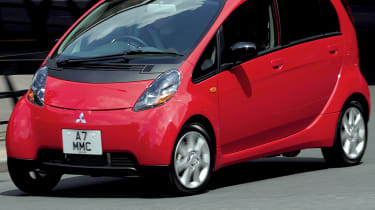 Driving The Mitsubishi is immediately at home in town. Light steering and a tight turning circle make it easy to manoeuvre, and the auto gearbox doesn’t suffer the jerky low-speed movement of a Smart’s automated shift. However, in kickdown, the Mitsubishi sounds harsh. The 660cc turbocharged engine has a tiny 57bhp output and only 85Nm of torque, so it’s no surprise the i takes 15 seconds to get from 0-60mph. However, it buzzes along happily in city traffic, and out of town it can maintain a reasonable motorway pace. Inclines are best taken with a run-up though. With its narrow track, the Mitsubishi is unsettled by side winds, too; it doesn’t feel that stable at speed. However, it does have a reasonably forgiving ride – the soft suspension makes for a jar-free experience on all roads. Once into corners, the tiny front wheels soon scream in protest, and there’s plenty of body roll, but while the steering doesn’t weight up at speed, it has a reasonably natural feel. Admittedly, it isn’t as reassuring in bends as a conventional small car, but the handling doesn’t throw up any nasty surprises. However, with no stability control, those thin tyres and a narrow track, any high-speed lane change is dramatic.

Marketplace With only 300 examples coming to the UK this year, the Mitsubishi i is going to be a rare sight on our roads – yet with its futuristic looks and unique dimensions, it certainly stands out (even if, from some angles, it looks like a four-door Smart ForTwo). Mitsubishi, to see how UK customers react to the car, will initially import only 300; there’s just a single trim, with a 660cc turbocharged engine mated to an automatic gearbox. Designed to fit into the country’s K-car category (Kei jidosha – ‘light vehicle’), Japanese buyers have clamoured for the i: Mitsubishi will be hoping for a similar cult following over here. The i’s obvious rival is the Smart ForTwo, though this only comes in two-door guise. There are five-door city car rivals, such as the Fiat Panda, Kia Picanto and Toyota Aygo, but these are all larger than the tiny Mitsubishi.

Owning Measuring 3,395, the i is 143mm shorter than a Fiat Panda, yet has a wheelbase 251mm longer, which helps rear passenger room no end. However, the boot floor is high due to the engine underneath, and the narrow cabin means sitting three abreast isn’t possible. Up front the Mitsubishi lacks some of that ‘special’ feel, although the quality of plastics is pretty good. The dash looks modern, and the high-mounted audio controls are well placed, but it’s more inoffensive and functional than really unique. The driving position is high and it lacks any steering wheel adjustment, but overall the i doesn’t give you the impression that you are driving a really tiny car. Fuel economy will, though: in our hands, the i averaged 48.8mpg – one of the best figures we’ve ever got from a petrol engine. The one model available is well-specified too, with alloys, air con, power fold mirrors, ISOFIX child seat mountings and remote locking. However, the price reflects this, pushing the i into entry-level supermini money. We think that’s simply too much.

More on i Hatchback 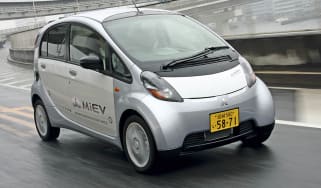 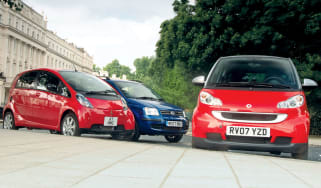 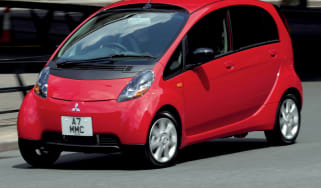 Compact dimensions make the Mitsubishi i perfect for the city, and the unique styling helps it stand out from the crowd
Mitsubishi i 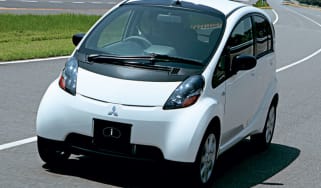 Small cars are the last thing you think about when someone mentions Mitsubishi. Its reputation for building fire-breathing saloons such as the Lancer …
Skip to HeaderSkip to Content