Compact dimensions make the Mitsubishi i perfect for the city, and the unique styling helps it stand out from the crowd 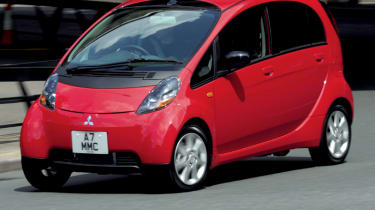 The Mitsubishi i is as close as you can get to a Smart ForTwo estate. Its compact dimensions make it perfect for the city, and the unique styling helps it stand out from the crowd. The i is sure to be a must-have among chic urban dwellers, but the five-door's limited dynamic abilities soon become apparent out of town. A car for people to buy with their heart rather than their head, as there are far more versatile models available for less money.

Nobody knows more about city life than the Japanese. And huge centres such as Tokyo have helped spawn a raft of urban vehicles that are considered either too small or too weird for UK tastes. But with the new i, Mitsubishi has a car that's ready to teach European rivals a thing or two about cutting through town traffic - and Auto Express has driven it first.

From nearly every angle, the futuristic Mitsubishi looks like an estate version of its only direct UK rival, the Smart ForTwo. Despite the similarities, though, the cars share only their concept, layout and some gearbox technology. The Japanese model has a 660cc three-cylinder turbocharged petrol engine mounted in front of the rear axle, beneath the boot floor.

As the car has been built around a bespoke aluminium spaceframe chassis, designers have been able to push the wheels right into the corners, maximising interior space within very small exterior dimensions.

Climb inside the Mitsubishi, and the space available is immediately impressive. Even though some of the plastics seem a bit cheap, the dashboard design is modern. The driver doesn't feel too close to the front passenger, and two adults can sit in the rear with adequate head and legroom. Only the boot space is compromised by a high floor, due to the engine being located underneath.

Turn the key, and the little motor breaks into life with a characterful three-cylinder buzz. A conventional four-speed automatic transmission feeds power to the rear wheels, but with only 64bhp on tap, the Mitsubishi's performance won't win prizes.

Initially, the 0-62mph sprint time of 14.9 seconds seems unforgivable. However, when travelling at speeds below 40mph, the turbocharged unit helps the i keep pace with other traffic. When there are four occupants and their luggage on board, though, bear in mind you will have only 16bhp per person...

As you would expect, the steering is light and reasonably direct for city driving. The turning circle is superb, but at higher speeds the i feels less stable and agile than a conventional supermini. At least the ride quality is better than the ForTwo's, and the Mitsubishi does a good job of smoothing out bumps at any speed.

Initially only 300 examples of the i will be available when the newcomer joins the line-up next month. Bosses will be keeping a close watch on demand, and are ready to import more to the UK if necessary. The maker plans to increase availability to other European markets if the car proves a success in Britain.

Yet the biggest hurdle facing potential buyers is the cost. There is only one generously equipped model - for £9,084. That means it's more costly than a host of possible rivals, from the Vauxhall Corsa to Fiat's Panda. A fixed-price servicing deal is also on offer, but that doesn't make the short 6,000-mile oil-change intervals any less inconvenient.

It's difficult to pinpoint any one area where the i outclasses the competition, but the newcomer's unique shape and distinctive looks will ensure it's a hit on the high street.