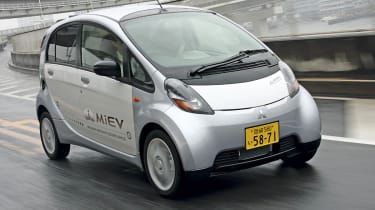 There’s much to like about the i MiEV. It’s quick, quiet and fun to drive. What’s more, the electric motor is mounted under the boot floor, so there’s no compromise on space. The big downside is range. Even in Eco mode, it will cover only 100 miles before it needs a recharge, so it’s best-suited to urban motoring. However, it’s as close to a usable electric city car as we have come so far.

When it comes to city cars, the Splash is the future for Suzuki – but can the same be said of Mitsubishi’s new i? Powered solely by electricity, it doesn’t emit any CO2 on the move and sprints from 0-60mph five seconds quicker than the petrol version.

Called the i MiEV (which stands for Mitsubishi innovative Electric Vehicle), the car goes on sale in Japan next year and could make it here after that. Auto Express took a drive to see if it really is a glimpse of tomorrow’s world

Apart from the stickers and a plug-in socket, the exterior is identical to the regular i. Inside, the only changes are the addition of a battery meter, while the auto box is swapped for a selector with two modes – Drive and Eco.

Out goes the 660cc three-cylinder turbo petrol engine and in comes an electric motor running off lithium-ion batteries spread underneath the seats.

Power is identical to the petrol car, at 63bhp, but torque is up from 85Nm to 180Nm. Response is instantaneous, and the i races from 0-60mph in less than nine seconds in virtual silence.

Despite carrying an extra 180kg, it actually handles better than the petrol model, thanks to a lower centre of gravity, and it rides comfortably. Drive hard, though, and the batteries will run out within one hour – which is where Eco mode comes in.

This drops power to 42bhp, and Mitsubishi claims you can travel 100 miles before recharging. Choose the special quick-charge mode, and you can refill the batteries to 80 per cent capacity in half an hour. Or plug in at home, where it takes 14 hours.