Small cars are the last thing you think about when someone mentions Mitsubishi. Its reputation for building fire-breathing saloons such as the Lancer Evolution is simply too strong. 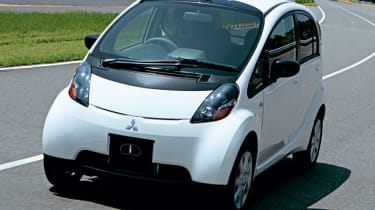 The i takes over the mantle of Mitsubishi's smallest car from the Colt. The newcomer will be highly specced and, what's more, offers a taster of the next-generation model - confirmed for 2010 - which is set to feature electric motors in the wheel hubs.

Small cars are the last thing you think about when someone mentions Mitsubishi. Its reputation for building fire-breathing saloons such as the Lancer Evolution is simply too strong.

However, that might be about to change, with a city car called the 'i'. Smaller than the Colt, the adventurous model is due to go on UK sale next summer. The firm says 'i' stands for innovation and imagination. That's certainly true of the engine; the 64bhp 600cc unit is rear-mounted, a first for Mitsubishi. But that leaves only a small boot and there's no storage space at the front.

While the Colt has been praised for its roomy cabin, the i feels very tight inside. There's decent leg and headroom, but it lacks width so you can find yourself rubbing shoulders with your passenger. Our test car had a pre-production dash, making it hard to comment on quality, but the design is funky and will appeal to young buyers. The high-mounted gear selector for the four-speed auto box helps boost space.

On the road, the i is at its best at urban speeds, and accelerates smartly up to 30mph. Thanks to its turbo engine, few small cars are faster away from a standstill. However, the motor is noisy when pushed, and this isn't a model you'd want to spend time in on the motorway!

Although the ride is relatively smooth at low speed, the i becomes more of a challenge over rough roads. The steering lacks precision, too, meaning you need to concentrate on the line at cruising pace. However, Mitsubishi bosses say they are planning a range of chassis improvements, and engineers have assured us the car's high-speed manners will be sorted for the UK's challenging highways. We can't wait to try it... because although the i may officially stand for innovation, it's pretty intriguing, too.