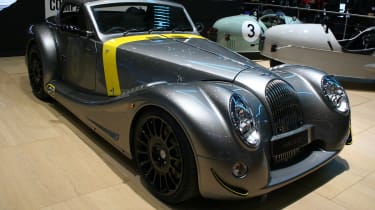 Morgan has revealed its race-inspired Aero GT at the 2018 Geneva Motor Show. As a swansong to the Aero 8 sports car, just eight Aero GTs will be built and every one has been sold; at a cost of £120,000 plus local taxes.

The Malvern-based manufacturer claims the Aero GT is the "most extreme road-going Morgan to date", with all-new hand-worked body panels and enhanced aerodynamics. Each example uses the the standard car's naturally aspirated 367bhp 4.8-litre BMW V8 engine, mated to a six-speed manual gearbox. Morgan says it'll be the last of its cars to use this tried and tested motor. Like the standard car, it'll do 0-62mph in 4.5 seconds and hit 170mph flat out.

Each of the eight customers will be treated to a one-on-one design consultancy with the brand's chief designer Jon Wells. As a result, no two examples will look exactly the same, despite all featuring updated and aero-tested bodywork.

Wells said: "The Aero GT, unlike its predecessors, adopts an unconventionally aggressive aesthetic. However, a purist approach to achieving a design in which ‘form follows function’ has been rigidly adhered to." 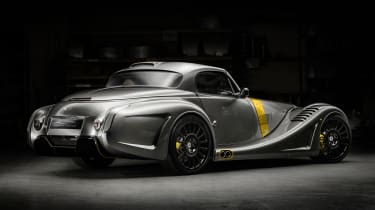 The Aero GT utilises the Aero 8’s hand built aluminium body, though tweaked with additional aerodynamic appendages to reduce drag and increase downforce. The race-derived louvres above the front wheels provide additional downforce at the front and are lifted directly from the Aero 8 GT3 racing car. Grip at the rear is improved thanks to a large diffuser.

All cars are offered with an optional carbon fibre hard top, which is said to take inspiration from 1960s race cars. The roof gets a rearward facing roof vent that reflects the tail-light graphic – also improving the Aero GT's drag coefficient. The cabin is hand-finished with a series of painted stitching and pinstripe accents. Morgan will offer an extended choice of wood finishes, too.

The GT marks the end of the Aero 8, which first began production back in 2000. It was a radical addition to Morgan’s range, being constructed with aluminium instead of utilising Morgan’s traditional wood-based craftsmanship. It was also Morgan’s first all-new car since the 1964 Plus 4 Plus, which spawned the 1968 Plus 8. The Aero 8 ended production in 2010 but it was revived five years later at the 2015 Geneva Motor Show.

What do you think of the Morgan Aero GT? Let us know in the comments section below…