Funky and compact learner-legal, geared bike with attitude and a growing cult following. What’s not to like? 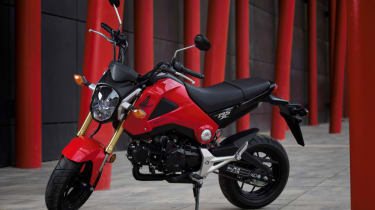 Like the original ‘Monkey’ bike, the MSX is another winner for Honda. It’s small, but not overly compact, and although it looks like a gimmicky machine, don’t be fooled. The MSX is perfectly formed and will appeal to youngsters looking for a funky, geared bike and to older riders looking for something just a little bit different to have some fun with. Fun, that’s what riding is all about, right?

Honda launched the legendary Dax, or Monkey bike, back in 1963, and it’s still a cult classic. Fifty years later, they released the MSX-125, or Mini Street X-treme to give it its full (boring) European name. In the USA and around the world, it’s affectionately known as ‘The Grom’ and is ridden by people of all ages.

It’s quickly becoming the stuff of legend. Back in 2013, a new MSX-125 cost just £2300, but prices have jumped quite a bit since then. The model was revamped for 2016, and it now comes with even sharper styling than the original, as well as having ABS as standard and costing £3293.

The fuel-injected engine goes amazingly well, using the full 9.65bhp and 10.9Nm of torque to propel it away pretty sharpish. The Grom is a lively little machine, for sure. Unlike most geared bikes, the MSX has a four-speed gearbox: it’s smooth to use and less daunting for a novice than a six-speed ’box. The brakes are as you’d expect from Honda: they’re powerful, progressive and will stop you safely if things do get a little skittish, thanks to the excellent ABS system. 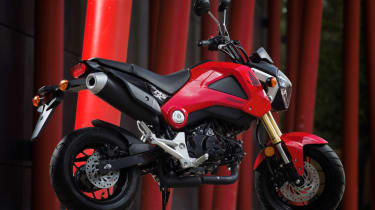 When you see an MSX up close for the first time, it looks small, but don’t let it fool you, it’s been well designed and is actually fairly roomy. You’re sat ‘in’ the bike, rather than perched on top of it, and this gives you an added feeling of control. You can certainly hoon around on it and not only is it a great machine for nipping in and out of traffic, you can also turn it around in the smallest of spaces. Its suspension is plush, too, more than up to the job of keeping this little bike under control. The Grom has attitude as well: it accelerates very well, will top out at around 67mph and gets up there fairly quickly, too.

Given that The Grom only has a tiny 5.5-litre tank, you’ll be glad to know it sips fuel at around 105mpg when ridden in the real world, so it’s hardly expensive to run. It’s reliable as well, as you can tell from the Honda badge on the tank. Look ‘Honda’ up in a thesaurus and it’s listed proudly alongside ‘bulletproof’, which is not a bad place to be. Insurance isn’t high on these bikes, either, despite their near-cult status. 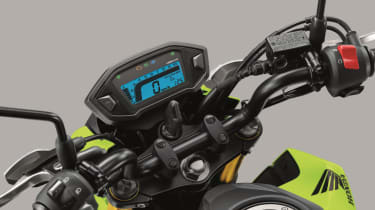 Built in Honda’s factory in Taiwan, the MSX looks stunning, no less of a bike than any of the company’s Japanese-built machines. The whole look, design, feel and build of the bike feels just like you’d expect a Honda to be. On a practical level, you may not have the storage space of a scooter, or the ease of use of an automatic transmission, but you will be getting a great little useable bike with some extra street cred thrown in for good measure. 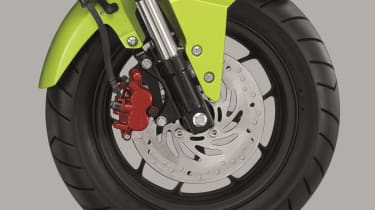