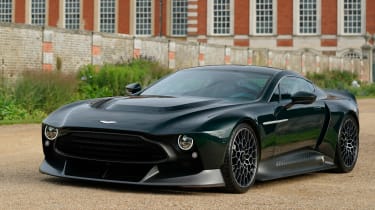 This is the Aston Martin Victor. It’s a bespoke supercar project, commissioned by a private customer and realised by the British firm’s in-house coachbuilding arm, Q by Aston Martin.

The Victor pays homage to the classic Aston Martin V8 Vantage of the 1970s and 1980s – and it takes its name from the company’s then Executive Chairman, Victor Gauntlett, who rebuilt the Aston Martin brand between 1980 and 1991.

Gauntlett oversaw the latter half of the original V8 Vantage’s production cycle and was the man famously responsible for negotiating James Bond’s return to Aston Martin for the 1987 film The Living Daylights, which featured a specially modified V8 Vantage.

The Victor started out its life as a refurbished carbon fibre monocoque from the One-77, to which Aston Martin added a range of retro-styled carbon fibre body panels – all of which were designed using fluid dynamics testing to offer racecar levels of downforce.

Aston Martin says that at 100mph, the Victor generates 842Nm of downforce – more than 300Nm up on the company’s race-prepped Vantage GT4 racer.

Like the classic V8 Vantage, the Victor features a slab-faced nose with an aggressive splitter and squared-off rear with a ducktail spoiler. There’s a similarly shaped radiator grille up front, too, along with a set of round headlamps and a Pentland Green paint finish, which is similar to the Buckinghamshire Green paint that was available on the original car. 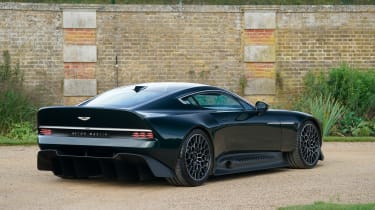 Inside, the bespoke one-off supercar’s seats and dashboard are trimmed in a blend of Forest Green and Conker Bridge leathers, while the headlining and door pillars are finished in cashmere. Solid walnut is used for the gear knob and cabin trim – and the Victor’s steering wheel is a refinished version of the motorsport-derived unit fitted to the Vulcan.

Once the Victor’s platform and aerodynamics were finalised, Aston Martin bolted on a host of chassis components from the track-only Vulcan, including its inboard springs and dampers, centre-locking hubs and six-piston carbon ceramic Brembo braking system

Power comes from a naturally aspirated 7.3-litre V12 which produces a staggering 836bhp and 821Nm of torque. Power is fed to the rear wheels via a six-speed manual gearbox – which means the Victor is the most powerful manual sports car Aston Martin has ever built.

Check out our full review on the new Callum Vanquish here...