The all-electric Nio ES8 SUV is currently only available in China, but could its innovative switchable batteries be a real EV game-changer? 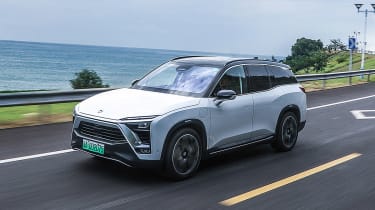 The Nio ES8 is a distinctive and capable premium SUV that’s almost ready to compete with the current crop of European (and American) electric cars. It’ll challenge a Tesla for performance, and while a shorter real-world range might put buyers off, the innovative battery-switch service could be a game-changer for EV sceptics.

Nio grabbed the headlines in September when it listed the company’s IPO on the New York Stock Exchange. The Tesla competitor is one of a raft of Chinese New Energy Vehicle (NEV) start-ups, and while most have no history of producing cars, Nio’s involvement in Formula E puts it well ahead of the pack.

Things kicked off last year with the EP9 hypercar, which set a new production car lap record at the Nurburgring Nordschleife. But now the firm is concentrating on real-world models like its new ES8 – a Tesla-rivalling seven-seat SUV.

Currently only available in China, the ES8 is an imposing all-electric SUV that measures slightly shorter than a Tesla Model X. It has been designed in Germany, yet looks suitably futuristic in its proportions. Nio has yet to announce any firm plans for European expansion, but given the multinational team and company structure, we could see cars on sale here within two years. 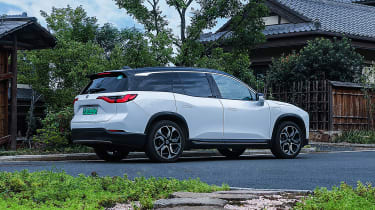 The 222-mile range (NEDC) is not as far reaching as the most expensive Teslas, but Nio’s joker card comes in the form of switchable batteries, which can be swapped out in as little as three minutes. Fast charging can replenish the batteries up to 80 per cent in less than an hour, while a full charge takes 90 minutes. A complete charge on a domestic plug takes 10 hours. In China, buyers have the option to rent a battery pack rather than purchasing it outright with the vehicle, too.

Dual electric motors provide intelligent all-wheel drive with at least some off-road ability; with the suspension raised the ES8 can wade water up to 400mm deep. The adaptive air springs deliver, in the most part, a smooth ride – even with on Founders Edition’s 21-inch wheels. At high speeds the car lowers to improve stability, and when parked it can squat to help while loading heavy items.

The sheer amount of power and torque on tap provides sports car levels of performance, too. With no gears, there is a simple toggle switch on the centre console for drive and reverse, with a button on the side for Park. Unless you really push the car, you’d be forgiven for forgetting how powerful it is; the serene driving experience is only tempered by the UFO-sounding pedestrian warning sound at lower speeds.

The steering initially feels light, but it is actually much better balanced than most Chinese cars – and more on par with European standards. Unlike some EVs you can’t choose the level of braking regeneration, and the standard setting is quite heavy. Take your foot off the accelerator and the car will slow quickly to around 5mph, meaning you rarely need to use the brake pedal in town.

Nio has taken a leaf out of Apple’s book and outsourced production to a to a purpose-built factory run by JAC Motors. Perceived quality is reassuringly high, with good exterior panel fit and premium materials inside; Nappa leather swathes much of the interior including the dashboard and upper parts of the doors. 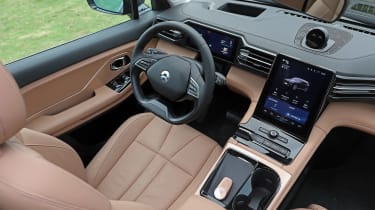 Perhaps the biggest surprise is the way Nio has chosen to swap out the glovebox for a fold down foot rest, giving the front passenger better legroom. The electrically adjustable seat goes back much further than it might in a Model X, allowing those in the front to attend to children in the back.

Unlike many supposedly seven-seat SUVs, it is possible to seat adults in the third row, too, although headroom is limited. These seats fold flat with the boot floor via an easy release catch, increasing luggage space.

Functions such as the massage seats and climate control have voice activation by AI-helper NOMI, which sits on top of the dashboard and swivels to face you. Currently, NOMI only understands Chinese, though, and will need adapting for European buyers. In our experience it isn’t the most responsive system, and needs to have commands done in a certain way for it to understand.

The ES8’s biggest problem, however, is that a lot of the software is simply not ready. Over the air updates will bring autonomous driving features later down the line, along with a more mundane 360-degree parking view. The hardware is all there, but the tech team has yet to catch up with production-ready software.