Sitting on the same platform as the new Leaf, the Nissan IMx Kuro concept previews the brand’s electric SUV plans with a 373-mile range

Nissan will add a fully electric SUV to its model range in 2020 based on the IMx Kuro concept, and company bosses have high hopes for the new model stating that it will become one of the ‘icons’ of the brand.

The electric SUV model will sit on the same platform as the new Nissan Leaf but will use a re-engineered lithium-ion battery pack for a range of up to 370 miles.

Speaking at the Beijing Motor Show, Nissan’s chief planning officer Philippe Klein told Auto Express about the importance of the new model. “The [IMx] concept embodies out vision of intelligent mobility, the fact the vehicle is electric and some autonomous capabilities,” he said. “It is an important vehicle and it will become one of the icons of the brand.”

Initially revealed last year at the Tokyo Motor Show alongside the Leaf Nismo concept as the IMx, but updated to become the IMx Kuro at the 2018 Geneva Motor Show, the concept is said to offer a glimpse into the future of Nissan’s Intelligent Mobility; that means how it sees cars integrating with society in the years ahead.

The IMx sits on the same EV platform as the new Leaf, but Nissan says it features a re-engineered high-capacity battery for a claimed range of up to 373 miles. Two electric motors, one mounted on each axle to offer four-wheel drive, generate 429bhp and 700Nm of torque. No other performance figures have been issued. 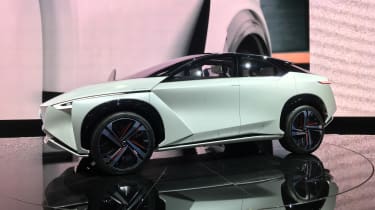 The IMx also features a look at the future of Nissan’s ProPILOT driver assistance system, which allows it to operate autonomously. The cabin has a retractable steering wheel and seats that fully recline. A full-length OLED display has replaced the dash, and drivers can control the instruments via eye movements and hand gestures.

Nissan says the IMx is able to drop occupants off at an airport, drive itself to a car park and connect to the grid to recharge. Once the owner has returned, the car will set off autonomously and collect them.

The production version is likely to feature toned-down styling, but Nissan’s V-motion grille is visible at the front of the IMx, while the absence of a B-pillar has allowed rear-hinged back doors to be fitted.

Would an all-electric Nissan SV be a success? Let us know in the comments section below...