The exhibit is part of Nissan and Lucasfilm’s partnership ahead of the release of Star Wars: The Last Jedi in December 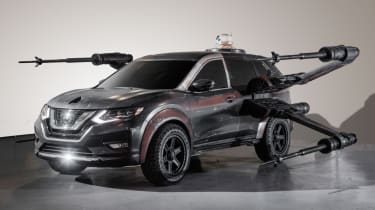 Nissan has unveiled six Star Wars-inspired concept vehicles in partnership with Lucasfilm at the LA Motor Show ahead of the sci-fi franchise’s upcoming release ‘The Last Jedi’.

The bigger Nissan Maxima saloon has had a look inspired by character Kylo Ren’s facemask. The black and silver paintjob compliments the V-shaped design at the front, which is made using a single block of milled aluminium. Nissan has also curated a separate Maxima resembling Kylo Ren’s TIE Silencer, which makes its Star Wars debut in The Last Jedi film. 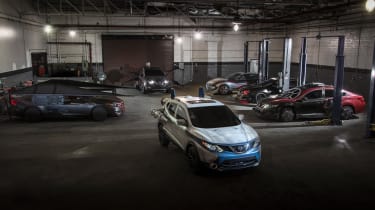 A third Maxima was showcased at the Los Angeles Convention Centre based on Star Wars character Captain Phasma. The front bumper and bonnet is replaced by high-gloss silver ‘armour’ made from aluminium, while the silver colour scheme continues along the bottom of the saloon. Black paint bathes the top of the car with a red accent line running through the middle.

Next up is the Nissan Rogue, which uses Poe Dameron’s X-wing, part of the New Republic Starfleet, as it’s inspiration. The thrusters and four laser cannons can be seen along the side of the crossover SUV, which is fitted with rugged off-road tyres. 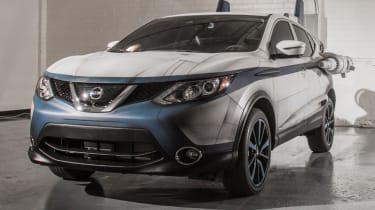 Finally, the Rogue Sport gets an A-wing-inspired look, painted in a two-tone white and blue paintjob. The wheels have also been painted blue, while the thrusters seen in The Last Jedi make an appearance behind the rear doors.

The impressive exhibition is part of Nissan’s LA Motor Show stand and designed to promote ‘Star Wars: The Last Jedi’ being released in UK cinemas on 15 December.

If you had to drive one of Nissan’s Star Wars cars to work every day, which would it be? Tell us in the comments…