EV and autonomous tech to shape Nissan interior design, starting with the IMx SUV in 2020 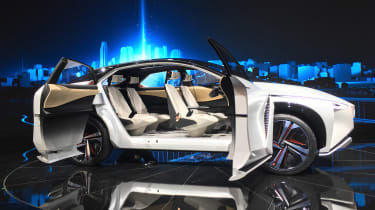 Nissan is set to beef up its interior design budget so future cars can better compete in an increasingly autonomous world where customers will care more about their cabins than in the past.

“From 2020 it will be the real autonomous and electric vehicle era, so at that time I think we will not continue the current design direction,” he said.

“Before, EV competition was small, but now it is much greater, so appearance is more important. Tesla is here already, so we have to compete.”

With future customers spending more time not driving they are more likely to notice the quality and detail of their car’s interior. And as autonomous vehicles and EVs do not require so much space for engines, this also provides opportunities to do things differently.

“The floor can be flat, and the dashboard can be very minimal as the air-conditioning unit can go in the space where the engine compartment would normally be,” Aoki explained.

As to what some of this change might look like, Aoki cited the IMx electric compact SUV concept (revealed at October’s Tokyo Motor Show) with its retractable steering wheel controls, a focus on simple shapes and use of high-quality materials that reference Japanese culture. Indeed, that concept will lead to a production model in two years.

And Aoki’s under no illusion that Nissan needs to change fast. “The world is very small. Every car maker is finding the same influences so cars are getting more similar. In the next ten years I want to push Nissan a bit more above the crowd in terms of perception.”

As part of that push, expect the interior of your next Nissan to be a much more special place.

With fully autonomous vehicles getting closer by the day, why not take a read of our extensive guide to driverless cars?