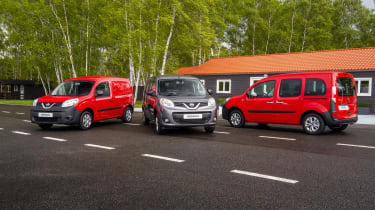 This is the Nissan NV250, a new entry in the small van sector that will be for sale in the UK in September. If it looks a little familiar, that's because it's essentially a renosed Renault Kangoo, with Nissan's V-shaped grille replacing the Renault diamond up front - even the headlights are the same.

But that's no bad thing, because it means the NV250 uses tried and tested mechanical components underneath, and means Nissan is confident enough to supply the van with the standard five-year/100,000-mile warranty it gives to all of its light commercial vehicles.

There are three body styles available, with a Panel Van in L1 and L2 lengths and an L2 Crew Cab variant, too. The Panel Van has the option of two or three seats in the cab, while payloads are 650kg for the L1 and 800kg for the L2. 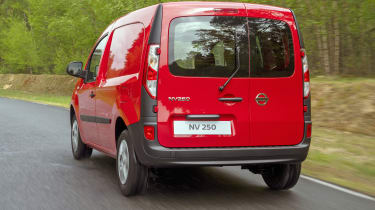 Turning to the Crew Cab, this model has two seats in the rear, while adding the multi-positional bulkhead means you can move the seats out of the way to make room for more cargo. The Crew Cab comes in the longer L2 body style only, and has a payload of 740kg. The convenience of the multi-positional bulkhead means cargo volumes range from 2.4 to 3.6 cubic metres. All vans get asymmetric rear doors, while the L1 has a single sliding side door, and the L2 gets a pair of sliding doors.

The engine range is also sourced from the Kangoo, with the 1.5 dCi diesel available in three power outputs. There are 79bhp, 94bhp and 113bhp units offered in the Panel Van, while the Crew Cab drops the least powerful of these engines.

Inside, the NV250 has a cab that's identical to the Kangoo's, with plenty of grey plastic and a design that puts function over form. Like the Renault there's the option of TomTom navigation on higher spec models.

The Nissan NV250 goes on sale in September, and it will be sold alongside Nissan's electric e-NV200 van. While the Kangoo is also sold in electric guise, Nissan has yet to confirm whether we will see an e-NV250 in the future.

What do you think of Nissan's NV250? Let us know in the comments...