The Nissan BladeGlider has been revealed at the Tokyo Motor Show, and it could make production 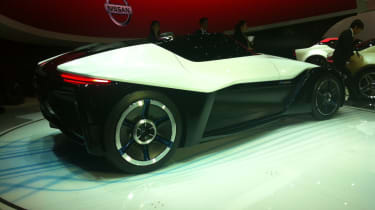 The Nissan BladeGlider, an all-electric sports car inspired by the radical Deltawing Le Mans car, has made its debut at the Tokyo Motor Show and Nissan bosses have even hinted to us that it’s set to make it to production.

You can see from the radical styling of this two-door that there’s plenty to be done before it’ll clear safety regulations for production models but Nissan is serious about the BladeGlider and said it could be in production within three years.

Andy Palmer, Nissan’s executive vice president, told Auto Express: “We have a buck (prototype) running based on an Ariel Atom with a narrow track at the front – I’ve driven it and it’s sensational. With the batteries positioned low down the grip is incredible.”

So what is the BladeGlider all about?

“A clean slate was the starting point for this project,” says Francois Bancon, product strategy general manager. “The goal was to revolutionize vehicle architecture to change the way we think about cars, and to see how zero emissions can help redefine our conception of vehicle basics.”

Nissan says that the BladeGlider production car could be the first use of in-wheel electric motors.

The inspiration for the car’s 1.0-meter wide front tread and over 1.8m rear width comes from the Deltawing Le Mans car, which proved that its design helps improve handling and aerodynamics. Unlike the Le Mans car, this concept has seating for three, with the driver sitting in the middle with two passengers behind and to each side.

British designer Ben Bowlby, who penned the 2012 Deltawing and the ZEOD (Zero Emission On Demand) race car slated for next year’s Le Mans, is the driving force behind the BladeGlider’s unique silhouette. “By its very nature, the Deltawing shape with its narrow front 10 cm wide tyres, wide rear track and downforce maximizing underbody does not need huge rear wings like other race cars to keep it planted to the road.” And those narrow front tyres develop enough grip to corner at over 120mph.

It all sounds like an exciting future for Nissan’s sports cars, and all the signs are that is going to happen. Take it from Palmer: “The BladeGlider tries to make the connection between GT Academy, Nismo and a new Genre of sports cars that’ll appeal to a new generation of car fans… I have every intention of making it happen.”