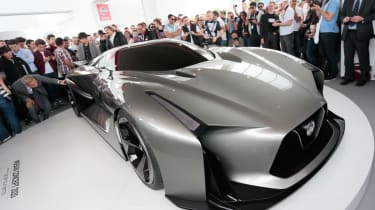 Nissan has officially revealed the Concept 2020 Vision Gran Turismo, a 2+2 virtual supercar developed exclusively for the PlayStation-only Gran Turismo 6 racing game. The covers came off the real-life version of this virtual car at the Goodwood Festival of Speed.

Available to download from July, the in-game version features an advanced aerodynamic body, and hints at “what a high performance Nissan could look like in the future.”

That’s because, having started as a design study for a team of young designers at Nissan Design Europe’s London base, the project soon caught the wider attention of the Japanese manufacturer.

This led to input from an advanced engineering team at the Nissan Technical Centre in Japan and, if rumours are to be believed, the radical styling theme could be our first pointer towards the next-generation GT-R Supercar, due in 2017. 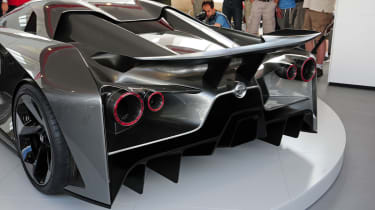 The Nissan Concept 2020 Vision Gran Turismo also includes a dramatic front end, with front air intakes that could swallow another car whole and a long bonnet that plunges down towards the low-set grille.

Moving further back, angular wheel arches cut into the sculpted flanks, while at the rear there’s a distinctive spoiler and massive diffuser. 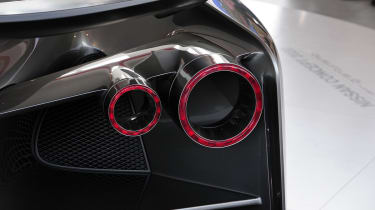 This styling apparently brings race-developed airflow management to a road car environment, just one of numerous such technologies to have passed across.

Engineers in Japan did this with a view to ensure the virtual car performs as realistically as possible and, tellingly, attempted to evoke aspects of the marque’s previous performance models “but present them in a futuristic way.”

If this concept really does provide a glimpse into Nissan’s future design language, we shouldn’t have to wait too long to find out. Various company execs have already confirmed a new GT-R is under development, and sources close to Nissan have revealed it will use hybrid power. 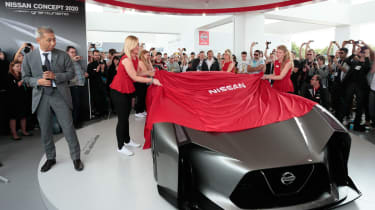 The powertrain is likely to be a development of the existing 3.8-litre twin-turbo V6 with an electrical F1-style KERS boost system, developed in conjunction with Williams F1 as part of a road car engineering collaboration signed last summer.

If you like the look of the Nissan Concept 2020 Vision Gran Turismo, why not check out our list of the best cars ever to feature in the Gran Turismo series?

From the McLaren 570S to Mazda MX-5, these are the 10 sports cars that we think are the best on sale
Renault and Nissan suffer heavy losses in 2020