‘There’s more to great design than just a sexy shape’ 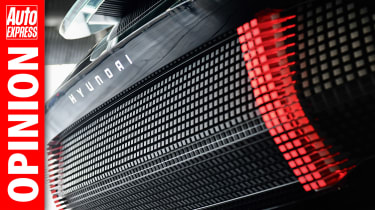 Talking to car designers is one of the biggest perks of my job. They’re the Hollywood A-listers of the car business; guys and girls who are some of the coolest – and most talented – people on the planet. Any time spent with them, even in my smartest attire, makes my own sense of style seem deeply inadequate.

Lockdown has provided an added opportunity to chat to designers – and not to feel quite so inferior, although even their more relaxed clobber outshines mine.

And lockdown, it seems, has given them valuable thinking time – time for them to be at their most creative. Never mind a supposed baby boom in nine months’ time, I’m hoping we’ll see a raft of radical concept cars heading our way later this year.

Jaguar’s design director, Julian Thomson, told me that he thought there would be a new mindfulness among car buyers, with electrification playing a larger part.

“I think this could mean that people are much more reflective about life; they want healthier, more wholesome lives with greater meaning,” he said.

Thomson believes that could have an effect on the design and materials used inside cars, too. “People will be more concerned about personal spaces and their health in their cars; the air quality,” he told me. “Those little capsules will be more of an escapist unit, so I think material is going to be very, very important.”

Two of my favourite concepts recently have come from SangYup Lee, head of the Hyundai design centre, with the 45 and Prophecy. These are two very different styles – reaffirming Lee’s desire to avoid ‘Russian doll’ designs for Hyundai models. Instead he says the family look comes from a greater focus on clever lighting tech as on the Prophecy (above).

We’re about to enter a golden age of design where detail matters more – inside and out. Technology will allow designers to do that, meaning even more beautiful cars.