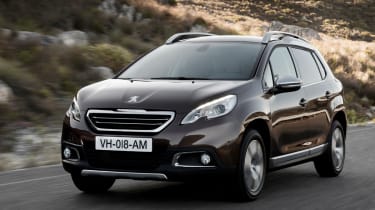 We were impressed by the 1.6-litre diesel Peugeot 2008, but this 1.6-litre petrol car is a different story. It feels slow and seems to be less refined than the diesel. Unfortunately, it’s not very efficient, either. If you want a petrol 2008, wait for next year’s 1.2 turbo cars.

We've already been impressed by the new Peugeot 2008. But is this 1.6-litre petrol version a better bet than the diesel we tried last month?

Its engine is the most powerful currently offered in the line-up, producing 118bhp. As you’d expect, that also makes it the quickest 2008 you can buy, but you’d be hard-pressed to notice this from behind the wheel.

Compared to the 1.6-litre diesel we drove, there’s no kick of acceleration. Instead, this 2008 feels gutless throughout the rev range, despite a promising 0-62mph time of 9.5 seconds. We didn’t get the chance to try the 81bhp 1.2-litre petrol, but it would surely feel even slower.

To make matters worse, the engine in our car was unusually noisy. It doesn’t even settle down on the motorway, revving away loudly in the background.

Considering the 2008 is front-wheel drive and doesn’t weigh very much, the claimed fuel economy figure of 47.9mpg isn’t too impressive, either.

If you do want a petrol-engined 2008, we wouldn’t recommend buying this one – Peugeot is set to replace it next year with a pair of 1.2-litre three-cylinder turbocharged models, producing either 109bhp or 128bhp.

The 2008 does perform well in other key areas, such as ease of driving. The light controls and elevated driver’s seat ensure you can easily weave your way through tight, congested streets.

Steering feels quick and sporty, and handling is pretty good, but this isn’t the model to finally bring engaging driving dynamics to the crossover class.

It does offer a comfortable ride and a spacious, high-quality cabin, though. Soft-touch plastics and shimmering chrome accents help to create a premium feel that’s missing in the Nissan Juke, while the boot holds 360 litres – almost as much as a Volkswagen Golf’s. The back seats are very usable and will comfortably fit adults six feet tall or more.

We definitely recommend the Peugeot 2008, but we’d advise either choosing the 1.6-litre diesel engine, or waiting until the three-cylinder turbocharged petrol models arrive next year.