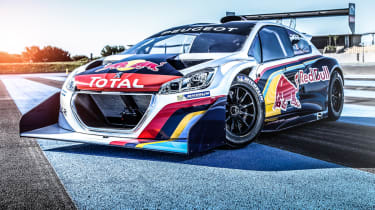 Nine-time world rally champion Sebastian Loeb has had his first run in the Peugeot 208 T16 he will race at this year’s Pikes Peak hillclimb. The Peugeot test took place at the La Ferte-Vidame track in North Western France.

Loeb drove a handful of laps and said, “The 208 T16 Pikes Peak is a rocket! It’s so powerful! The first time you drive it, each gear change practically stuns you. The shifts are really brutal, and it takes a little time to anticipate the sudden jarring. You get used to it, but it was quite disorienting to begin with.”

Over the next two months, Peugeot Sport will continue to develop the T16 ahead of its debut in the US. The car has been built to compete in the ‘Unlimited’ class, so features a huge two-metre-wide wing from Peugeot’s defunct 908 Le Mans car, a carbon-fibre body and a 3.2-litre V6 engine that develops 863bhp.

In metric horsepower, that’s 875hp, giving one horsepower for each of the 875 kilograms that the 208 weighs - and makes Loeb's car just the five seconds faster from 0-62mph!

Here’s how Loeb’s car matches up against the new Peugeot 208 GTi:

The annual Pikes Peak ‘Race to the Clouds’ will be held on June 30, and, although Loeb has never competed in the race before, he will be among the favourites to set a new record time. That’s because the 20-kilometre course now has a fully sealed surface right up to its 4,301-metre-high summit.

The current track record is held by New Zealander, Rhys Millen, who drove a Hyundai Genesis coupe up the course in 9:46.164 in 2012. Peugeot is looking to knock over a minute of that time.