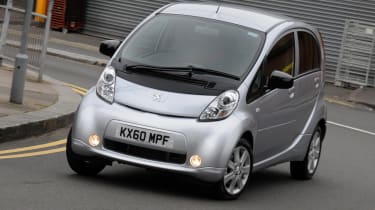 The Peugeot iOn started life as a Mitsubishi 'i' city car but the tiny petrol engine has now been swapped for a 64bhp electric motor and a set of high-tech lithium-ion batteries stowed behind the rear seats. This gives the iOn a range of 93 miles, so it's perfect for nipping around congested cities. Sharing all of its mechanicals with the Mitsubishi i-MiEV, the iOn is more expensive, but comes with a unique set of bumpers and safety gear that you don't get on the i-MiEV. There's only one body type, a narrow five-door hatch, and one trim level to choose from. Like most electric cars, the cost of the innovative powertrain pushes the price tag very high indeed.

The iOn is rear-wheel-drive and because the motor has no moving parts that need time to spool up, all 180Nm of torque is available almost instantly, making it feel quite fast up to 30mph. There's no noise from the motor to speak of making it extremely refined around town, and the automatic gearbox has just a single gear, which makes it incredibly smooth. The high driving position and huge windscreen give excellent visibility, and the iOn is well suited to city traffic. The downside is that the iOn really struggles on the open road or the motorway, where you'll be restricted to the inside lane to conserve battery power. The skinny tyres and tall shape also mean that its best not to make big demands on the chassis when cornering.

This is where the iOn excels. With zero tailpipe emissions, the iOn is free from road tax and the Congestion Charge, and is also eligible for the £5,000 government grant for electric vehicles. A single charge is estimated to cost around £2 and take around five hours, but fast charging bays will give an 80 per cent charge in just half an hour. The lack of moving parts in the mechanism for the electric motor means that it should be light on servicing too.

The iOn's cutesy styling suits its compact dimensions, and you might be surprised by how cleverly the car is packaged, with seating for four contained within its minuscule frame. The styling is essentially the same as its Mitsubishi sister car, with a slightly altered front bumper. The iOn comes with 16-inch alloy wheels as standard too. Sitting inside, its less impressive. The French firm has fitted a piano black insert to the centre console, but the plastics look quite cheap, and the interior is very basic, and some buyers might feel shortchanged by the lack of luxuries.

The iOn is designed as a urban runabout, mainly to be used by either a single driver, or with one passenger. Space in the rear seats is therefore quite tight, but they can be used for short journeys. There aren't many cubby holes up front but, despite the battery pack being stored under the boot floor, the 196-litre load space is just about big enough to fit a few shopping bags, and the rear seats split and fold to free up a little bit more space, but it's definitely no load-lugger.

As Peugeot offers customers the chance to lease the iOn rather than buy it outright, the warranty and servicing offers are very reasonable. There's a five-year, 30,000 mile warranty offered by the manufacturer, which is supported by an optional - and free - three additional years of support from the Peugeot dealer network. It might be a very new form of technology, but the electric motor is actually quite simple mechanically, and it doesn't put much stress on its moving parts, meaning breakdowns are unlikely. It's not quite as safe as more conventional small cars though, scoring four out of five stars in Euro NCAP crash tests.