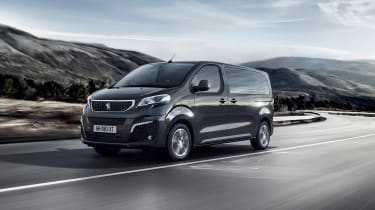 Peugeot has unveiled a new, all-electric version of its eight-seat, van-based Traveller people carrier. It’ll be available to order in the UK from July and will offer fresh competition for the diesel-powered Ford Tourneo and Renault Trafic Passenger – while acting as a direct rival for the new all-electric Volkswagen Caravelle.

The Peugeot e-Traveller is mechanically identical to the new e-Expert panel van, sharing the same platform and front mounted electric motor. The system has a maximum output of 134bhp and 260Nm of torque, which Peugeot says is enough for a 0–62mph time of 13.1 seconds and a top speed of 80mph.

Like the e-Expert, the e-Traveller’s with three drive modes. Eco mode limits the motor’s output to 80bhp and 180Nm of torque to maximise the van’s range. Normal mode bumps these figures up to 107bhp and 210Nm respectively, which Peugeot says is suitable for everyday driving – while Power mode unlocks the motors maximum output.

Peugeot will only offer a 50kWh battery pack to UK buyers, which will provide a maximum claimed range of 143 miles on a single charge. Peugeot also says the cell is guaranteed to retain at least 70 percent of its usable capacity for eight years or 100,000 miles.

When plugged into a 7.4kW single-phase domestic charger, the e-Traveller’s battery will recover a full charge in around 7.5 hours. An 11kW three-phase charger will provide the same state of charger in five hours, while a commercially available 100kW rapid-charger will top the van’s battery up to 80 per cent in just 30 minutes.

The e-Traveller’s battery pack is mounted along the spine of its chassis, which means there’s no change in practicality over the combustion engined model. With all eight seats in place, the people carrier has a maximum boot capacity of 1,500 litres – although this figures swells to 4,900 litres with the second and third seating rows removed.

To distance it from the combustion-engined variant, Peugeot has fitted the e-Traveller with a few cosmetic tweaks, including a blanked-off radiator grille, a new instrument cluster with a battery charge-level gauge and unique graphics for the van’s seven-inch infotainment system.

Buyers will also have access to a broad range of optional equipment, including a head-up display, heated seats, leather upholstery and a thermal pre-conditioning system, which enables remote setting of climate control functions using a smartphone application.

What do you make of the new all-electric Peugeot e-Traveller? Let us know in the comments section below…

The new all-electric Renault Master ZE van has arrived, with a starting price of around £45,000 and a 75-mile range
Skoda Octavia Estate vs Toyota Corolla Touring Sports