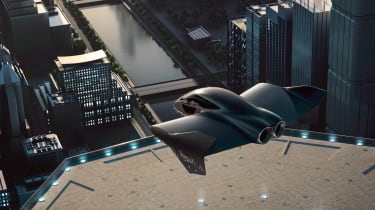 Porsche and Boeing, the American aerospace company, have entered a partnership which will see the pair develop an all-electric flying car. Porsche analysts have forecast that the urban air mobility market will expand rapidly after 2025 – and the German company says this latest partnership will “enhance its scope as a sports car manufacturer.”

Boeing is currently testing its own autonomous passenger air vehicle (PAV), which completed its first controlled vertical takeoff and landing in January 2019. The concept air vehicle is powered by an all-electric propulsion system, which is integrated into the vehicles wings, offering a claimed range of 50 miles.

• Flying cars: will the flying car market ever take off?

The concept measures 9.14 metres long and 8.53 metres wide. Future tests will see the prototype achieve conventional wing-bourne flight, as well as the transition between vertical and forward flight modes – notoriously the most challenging engineering hurdle to overcome for any vertical takeoff and landing vehicle.

Technical details on Porsche and Boeing’s jointly developed air vehicle remain sparse, but the finished product will likely be an evolution of the latter company’s most recent effort. The two companies have confirmed their forthcoming concept will be a “fully electric vertical takeoff and landing vehicle,” like Boeing’s PAV prototype.

Steve Nordlund, Vice President and General Manager of Boeing NeXt, said: “This collaboration builds on our efforts to develop a safe and efficient new mobility ecosystem, and provides an opportunity to investigate the development of a premium urban air mobility vehicle with a leading automotive brand.”

Engineers from both Porsche and Boeing will develop and test a prototype over the coming months, and analysts from both companies are currently assessing the market viability of personal premium urban air vehicles.

What do you make of Porsche and Boeing’s new flying car? Let us know in the comments section below…