The Porsche Boxster is the 2014 Auto Express roadster of the Year, with the Jaguar F-Type and Mazda MX-5 commended 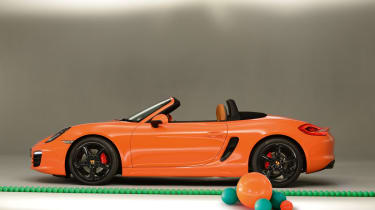 For the second year on the trot, the brilliant Porsche Boxster has blown away roadster rivals and retains its place at the top of the drop-top tree.

The Boxster’s recipe for success is simple, as it combines sleek looks with sublime handling to provide the ultimate wind-in-the-hair thrills. This straightforward philosophy extends to the Porsche’s roof, which is a traditional fabric set-up rather than a complicated folding metal affair.

• Best convertibles to buy this summer

As a result it can be lowered in seconds, allowing you to make the most of any brief spells of sunshine and get closer to the charismatic howl of the Porsche’s flat-six engine. Better still, thoughtful design means you’re not blown about by the wind, even at motorway speeds.

Yet the canvas covering’s multi-layer construction means that the beautifully built cabin feels as snug and refined as a coupé’s when the top is in place. 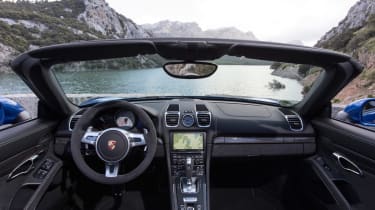 Whether the roof is up or down, you get the same thrilling driving experience. For starters, the mid-engined layout delivers perfect balance and poise in corners, while the naturally weighted controls brim with useful feedback.

And although there’s plenty of grip, it’s still possible to subtly adjust the car’s attitude with a combination of steering and throttle.

The 2.7-litre engine in the entry-level Boxster and the muscular 3.4-litre in the S serve up plenty of usable performance, while the standard six-speed box’s precise action encourages you to change gear just for fun. And when you’re not blasting down back roads with the top down and the engine singing, the Boxster is a remarkably civilised daily driver. The ride is firm but not uncomfortable, the cabin is roomy, visibility is excellent and the front and rear boots can accommodate a healthy 280 litres of luggage.

It doesn’t matter how hard you look, you simply won’t find a chink in the Porsche’s armour. Roadster of the Year in 2015? Don’t bet against it.

Don’t be fooled by its entry-level status, because the standard 2.7-litre Boxster boasts more than enough performance to exploit the car’s poised mid-engined handling. 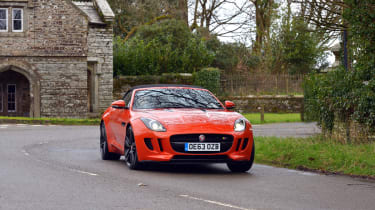 In terms of noise and drama, the gorgeous F-Type cnvertible has few rivals. Like its Coupe cousin, the drop-top Jag oozes charm and is great to drive, plus its V6 and V8 engines offer blistering performance and thunderous soundtracks. Only high prices and a cramped boot hold it back. 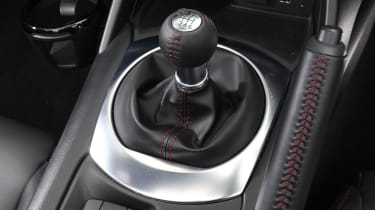 Most cars celebrating their 25th birthday would be taking it easy, but not the Mazda MX-5. Now in its third generation, the roadster still delivers plenty of smiles per mile for buyers on a budget. It’s an evergreen hit with its recipe for simple, low-cost fun, and 2015’s new car will have to be very good indeed to improve on it.