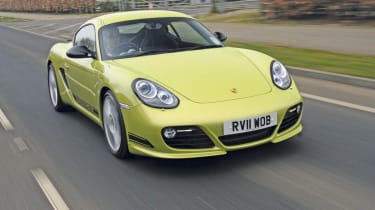 The garish wing and decals won’t be to all tastes, while the rigid ride will deter some. But for those who rate driver engagement above all else, the Cayman R is a delight. Using the beautifully balanced standard car as a starting point, the model has tauter responses and sharper reactions, while the small power upgrade and weight savings boost performance. The S is a better daily choice, but the R is one of the world’s purest, most engaging drivers’ cars.

It's one of the best-handling cars in the world – but now, Porsche’s Cayman is even better. This is the new special-edition R.
[[{"type":"media","view_mode":"content_narrow","fid":"69311","attributes":{"alt":"","class":"media-image"}}]]
Setting it apart is a fixed rear wing and deeper front bumper lip, although it’s the technical tweaks that make a real difference. The 3.4-litre flat-six engine gets an extra 10bhp, while the new car
is 55kg lighter than a Cayman S. This is thanks to the introduction of a smaller fuel tank, lightweight components such as aluminium doors and the removal of luxuries like a stereo and climate control. Options include a £2,141 PDK twin-clutch box – which slashes the 0-62mph time by three-tenths of a second – and ceramic brakes.
Sports suspension results in a 20mm-lower ride height, and a limited-slip diff ensures superb traction. On the road, the purity of the normal Cayman’s handling remains, but as there’s even less body movement, the R changes direction with go-kart-like agility.
The near-perfect balance of front and rear grip, beautifully weighted steering and fantastic power delivery combine to give a truly engaging experience. And while the racy suspension makes the ride firm on broken surfaces, precise damping means it’s still composed on smoother tarmac. With strong brakes, scintillating pace and sporting styling, the R is the most extreme Cayman yet.
Share this on TwitterShare this on FacebookEmail