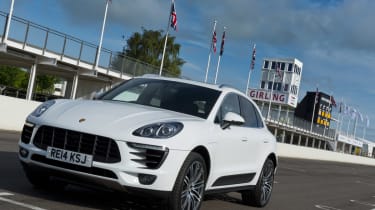 Viewed as an individual product, the Porsche Macan S is a superb piece of engineering. It’s spacious inside, quick when you need to be and comfortable and refined when you don’t. It’s biggest problem is that the S Diesel version costs the same, returns 10mpg more and feels just as quick on the road. We’d be able to swallow the mpg shortfall it sounded or looked significantly sportier, but it doesn’t. It’s easy to see why three out of five UK buyers will opt for the diesel.

If you still struggle with the idea of a diesel-powered Porsche, but like the sound of the Macan, then the Macan S is for you. Powered by a 335bhp 3.0-litre twin-turbo V6, it costs exactly the same as the Macan S Diesel and sits below the £59,300 394bhp Macan Turbo in the range - although the performance gap is smaller than you might think.

Porsche predicts that just 20 per cent of Macans sold in the UK will be an S, while a massive 60 per cent will be the diesel. Putting the 10mpg difference to the diesel to one side for a moment though, could the petrol-engined S actually be the sweet spot of the range? 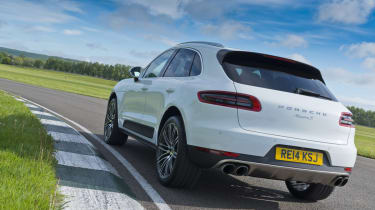 The way the engine delivers its power is immediately different. Whereas the diesel offers all 580Nm from just 1,500rpm, the V6 doesn’t produce its maximum torque until 5,500rpm. That’s not to say it’s lazy at low revs - the twin-turbos ensure that throttle response is sharp enough and there’s plenty of torque to cruise around in a high-gear, while power delivery is nicely linear and predictable.

Let the engine rev and there’s a growl from the exhausts, but it’s a bit too muted for our liking. The real surprise though is that despite a 0-62mph time that’s over a second faster than the diesel, in day to day driving it doesn’t feel that much quicker. On a racetrack, where you can chase the redline, it feels more at home, but in the real world the diesel’s rush of torque from low revs is far more useful.

Settle into a cruise and the refinement is superb, with just a whisper from under the bonnet and a faint wind rustle from around the wing mirrors. Order the optional air suspension with PASM adaptive dampers and the ride is beautifully cushioned, select Sport mode and the steering engine and chassis all raise their game transforming the Macan from an SUV to a sports car. 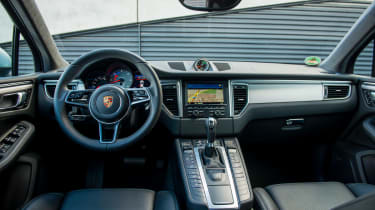 The electromechanical steering system is well weighted and fantastically direct, allowing you to place the front end accurately is a series of fast bends. There’s more body roll than you’d get with a 911 of course – that’s simple physics – but the way the body remains perfectly controlled when other SUVs would be getting out of shape is seriously impressive. Turn all the electronics off and you can even coax powerslides from the rear-biased four-wheel drive system.

Add in plenty of feel through the brake pedal and a PDK gearbox that can shuffle silently through its ratios in auto mode or rifle through them with no interruption is the power delivery in manual, and the Macan really is a joy to drive at any speed. We only wish it was more overtly sporty to justify the higher running costs – for UK buyers the diesel is definitely the one to go for.