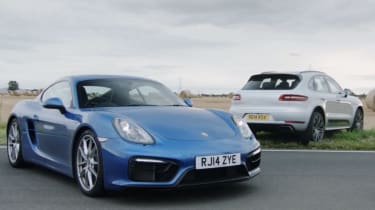 Porsche's range is bigger than ever, and we're testing two of the newest and most exciting models - the Macan Turbo and Cayman GTS. The cars couldn't be more different - the Macan a sports SUV, whereas the Cayman GTS is a more powerful version of the Cayman S. They both cost under £60,000, but how different are they on track?

The Cayman GTS is an absolute delight to drive around a circuit and set an impressive lap time of 1:10.5 seconds. That's 1.2 seconds faster than a Cayman S. How does the Macan Turbo compare?

The end result wasn't much of a surprise - the Cayman showed a clean pair of heels to the Macan around the test track, but there's more to these cars than racing against a stopwatch. The Cayman GTS is simply one of the finest cars I've ever driven on a circuit. It's beautifully balanced and an absolute joy to drive.

The Macan isn't as at its best when it's chasing a lap time, but it's got lots of grip and a very smooth, powerful and refined engine, and it's one of the best sports SUVs you can buy. So, in our minds, both of these Porsches are winners.

The second-generation Porsche Macan will be all-electric with no petrol option, and our exclusive images preview how it could look