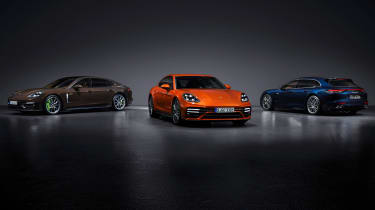 This is the facelifted Porsche Panamera, which gets major upgrades to its powertrains and chassis as part of a mid-life nip and tuck.

As is the norm with facelifts, the exterior tweaks are relatively minor. The executive saloon and its Sport Turismo ‘estate’ variant get the previously optional Sport Design front end, with larger air intake grilles, side cooling and a single-bar front light module. At the rear, there are new LED tail-lights, plus darkened clusters on GTS variants. Three new alloy wheel designs have been added to the range too, so buyers now have 10 to choose from.

The big shake-ups come under the skin, with new range-topping Turbo S edition that has a retuned version of the car’s familiar 4.0-litre twin-turbocharged V8 engine. It now produces 621bhp and 820Nm - gains of 79bhp and 50Nm over the outgoing Turbo edition - and can crack 0-62mph in just 3.1 seconds, and reach a top speed of 198mph. The Turbo S gets its own front-end look, with twin light bars and more body-coloured elements in the front bumper, to make the vehicle look wider.

There’s also a new electrified model, the 4S E-Hybrid. It mixes a 134bhp electric motor with a 2.9-litre twin-turbocharged V6 petrol engine producing 435bhp, delivering a total output of 552bhp and 750Nm. The 4S E-Hybrid can reach 62mph in 3.7 seconds and go on to a top speed of 180mph - but it features a bigger battery than previous Panamera hybrids (up from 14.1kWh to 17.9kWh), allowing up to 54km (33.5 miles) of pure-electric running. 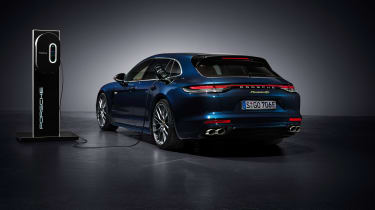 At launch, the 4S E-Hybrid is the only electrified version of the facelifted Panamera, but well-placed sources suggest that it will be joined by at least one other edition - potentially an even more powerful Turbo S E-Hybrid - by the end of the year.

Elsewhere in the range, the GTS gets a retuned twin-turbo V8 producing 473bhp and 620Nm (20bhp more than before); Porsche claims the alterations have made the engine feel keener to rev, more like a normally aspirated motor. The regular Panamera and Panamera 4S stick with the existing 2.9-litre V6, meanwhile, with an unchanged power figure of 326bhp.

Beneath it all, engineers have reworked all of the Panamera’s different chassis control systems across the range. Porsche claims that some of the set-ups have been created from scratch, and that the Porsche Active Suspension Management delivers improved damping comfort. The car’s electric anti-roll bar system also gets a new profile, for better body control.

The new Panamera is on sale now, with prices starting at £72,890 for a 4 and rising to £135,610 for the Turbo S. The first deliveries to UK customers are expected in late autumn.

Read all about our ride in the new Porsche Panamera facelift here... 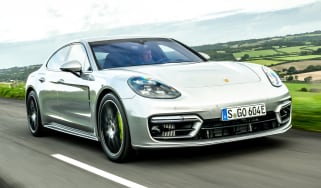 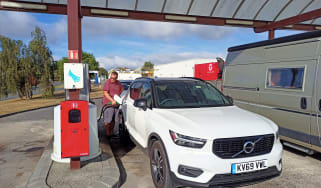