The Porsche Taycan 4S is the new entry-level model in the brand’s all-electric range, but is less actually more? 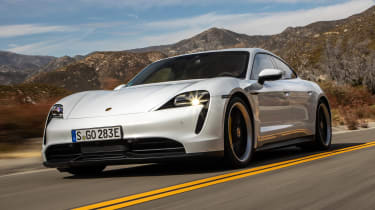 Let’s face facts. As with most high-end sports cars, from McLaren and Bentley to Porsche itself, the list price is fantasy. The Taycan 4S isn’t an £80k car at all; it’s much closer to a £100k one once you’ve added options. But that’s absolutely fine because it’s so good that, even at that price and with the complexities of speccing it, you won’t feel short-changed in any way.

It’s rare to drive a car that feels truly revolutionary, but that is exactly what the Porsche Taycan is – a vehicle that shows how much fun a plug-in future can be.

It’s even more refreshing to know that the new ‘entry-level’ Taycan is as remarkable as its Turbo stablemate. Probably more so, since it packs up to 523bhp and 640Nm or, if you step up from the standard 79.2kWh battery to the 93.4kWh Performance Battery Plus we’re testing, 563bhp and 650Nm.

That’s 0-62mph in four seconds, by the way, and it also means that the maximum range jumps from 252 to 287 miles. Even on 20-inch wheels in a British winter, Porsche’s range tool reckons that the 4S Plus will do about 220 miles between charges. 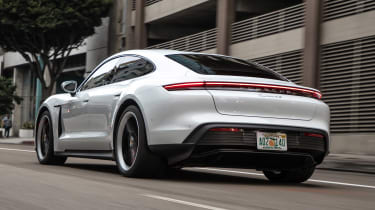 Which isn’t to say that the 4S is badly equipped. It gets adaptive air suspension, automatic LED lights, 19-inch alloys, a part-leather interior, electric seats, a 16.8-inch curved touchscreen with nav and wireless Apple CarPlay, and quite a bit more besides.

More importantly, it is brilliant to drive. This is a 2.2-tonne car but it hides its bulk remarkably well, jinking neatly into tight corners and scything easily through fast, sweeping bends. There’s a textural, fingertip-sensitive quality to the steering and its responses make the 4S feel every bit a ‘proper’ Porsche sports saloon. 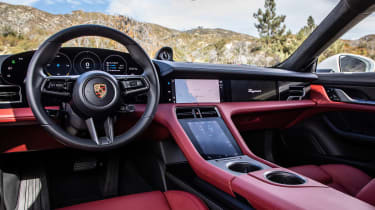 Our test car had the optional rear-wheel steering, active anti-roll bars and torque vectoring plus, which add up to around £5,000. There’s none of the inconsistent response you sometimes get with rear-wheel steer, though. The Taycan 4S is easy to wind down a fast road precisely, with enough playfulness to its chassis and pedal responses to keep you entertained, while also feeling composed and secure.

Skip the carbon-ceramic brakes unless you’re in the unlikely situation of planning a lot of track days in your Taycan; they’re expensive and a little short of the feel and precision you’d expect. We’d also like to see Porsche introduce wheel-mounted paddles to control the brake energy regeneration system. There’s no one-pedal driving mode, which is fine by us, but having the option of introducing more recuperation with paddles feels intuitive in any electric car.

The Taycan 4S will be easy to live with. Refinement is hard to fault, and while ride comfort is firm, the air suspension always feels tightly controlled and free of any uncouth jarring. Basically, stick it in Normal drive mode and the Taycan morphs into a stunning long-distance cruiser.

Charging on the standard 4S is a little slower than on other Taycan models, with a maximum charging rate of 225kW. Go for the Performance Battery Plus and you get the same 800V, 270kW peak charging rate as the Turbo models. 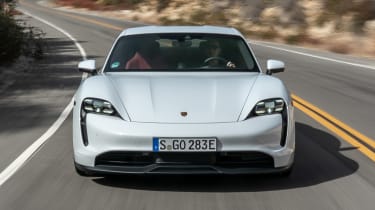 But it’s also worth adding the 150kW DC on-board charger – a £294 option. As standard, at most of the ‘fast’ public charging points you’ll find in the UK, the Taycan will only charge at 50kW.

So here’s the thing about the Taycan. It is extraordinary, but it is a pain that Porsche has made speccing one so complicated. Yes, this is the entry-level car in the range, but it’s hard to stomach that keyless entry, a reversing camera, heated seats and adaptive cruise control are all optional. We particularly wish that Porsche would just throw in the 150kW charging tech and a Type 2 charging cable (which costs £210 – a figure that really is taking the proverbial), because simplifying the charging aspect of electric cars is in everyone’s favour.

Even so, this is the best Taycan, because it makes the Turbo models feel like pure one-upmanship rather than necessity.