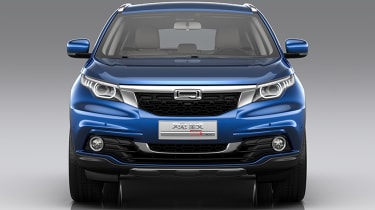 Qoros is a name you may not have heard of, but the Chinese firm is aiming to make waves in European markets very soon. We've already seen the Qoros 3 hatchback but now the 5 SUV has been revealed for the first time ahead of the official unveiling next month.

The brand revealed the Mazda CX-5 rival at this year's Milan Expo fashion show, claiming the location reflects its aspirations of a "unique pursuit for design that matches the spirit of the city". Whether the car you see here fits into that philosophy is for prospective buyers to decide. 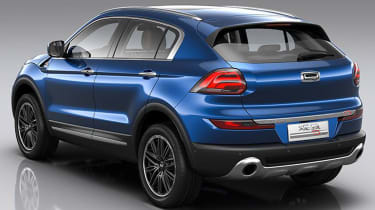 The Qoros 5 itself takes most of its design cues from the Qoros 3 hatchback, with the same chrome grille and wraparound headlamps. There's more than a hint of Kia Sportage in the side profile, while the rear-end gets a steeply-raked window and rugged bumper design.

Details are scarce so far as to what will power the Qoros SUV, but the 3 comes with a 156bhp 1.6-litre turbo petrol engine capable of 130mph and 43mpg combined. If the Chinese firm wants to succeed in Europe, we can expect some more powertrains to follow suit, with previous hints stating a plug-in hybrid is a possibility.

The 5, like the rest of Qoros' range, is yet to be confirmed for the UK, but the firm stated to us previously that when the range is extended they will expand further across Europe next year. Currently the 3 is sold in Slovakia, too.

What do you think of the Qoros 5? Let us know in the comments section below...