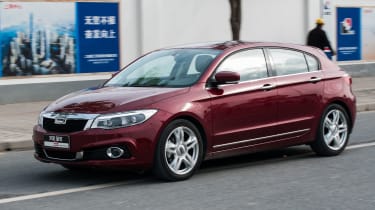 The Qoros 3 hatch is the most convincing Chinese car we’ve driven to date. There is a high-quality European feel to the interior and the more practical hatchback layout is far more appealing than that of the saloon. Technology and equipment are  a strength, but its looks are too understated. Expect a full range of diesel and petrol powertrains for the European launch, when the Qoros should be a good-value rival for the likes of the VW Golf and Ford Focus.

Chinese car companies haven’t made much headway in Western markets, but start-up brand Qoros has a better chance than most. Targeting the largest global segments, its first three cars are a small saloon, small SUV and the Ford Focus-rivalling family hatch we’ve driven here. Although it’s currently on sale in Slovakia, Qoros is waiting until it has a bigger range for the full European launch – likely to be in 2016.

Externally the hatchback is more attractive than the boring saloon, but still doesn’t really stand out. Changes include a slightly redesigned nose with new lower grille incorporating sportier elliptical foglights, plus wheels on all models are an inch larger than on the four-door and the alloys are different. Equipment is also more generous than on the saloon, with the top-spec Elegance getting xenon headlights. 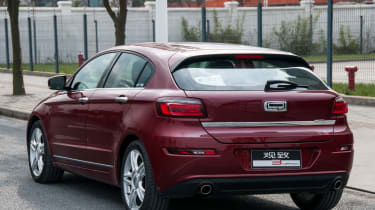 There is white piping and stitching on the black leather seats – a feature unique to the hatchback – plus an iPad-like touchscreen infotainment system dominates the dash. This promises seamless smartphone integration, so you can pre-plan a route via an app and load it into the car’s system. It also works with social media, letting you tell your friends where you are, while all functions are controlled by familiar swipes.

The 2,690mm wheelbase means rear legroom is good, and this is matched with adequate headroom. The back seats split and fold, plus there’s a ski hatch. With the seats in place, boot capacity is class-leading at 403 litres – 87 litres more than in a Focus – partly thanks to a very high parcel shelf.

Unlike many Chinese cars, the interior is finished to a high standard. There is plenty of soft plastic and good-quality leather. The only negative is the centre console armrest; it’s easy to catch a finger on the stiff push/pull mechanism. 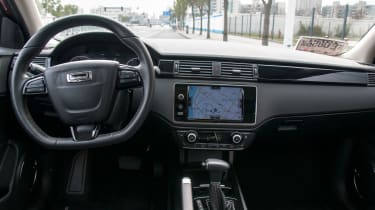 While Qoros is developing a range of new engines with stop-start, the only option for now is a 1.6-litre petrol, which is available in naturally aspirated and turbocharged guises. The Elegance model is only offered with the latter, as well as a dual-clutch automatic transmission.

Acceleration is brisk but hardly class-leading given the engine’s size, although Qoros claims the drivetrain is tuned for economy rather than raw performance. The gearbox doesn’t have a sports mode, and when you use the manual mode, a dash prompt tells you when to shift to maximise efficiency. But it makes more sense to leave it in auto mode. 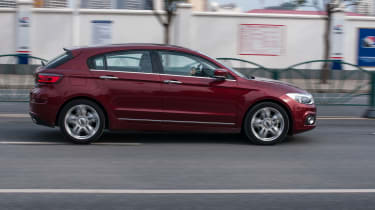 Damping has been tightened to give the hatch a sportier feel. Yet this is let down by the lightness of the steering – something likely to be corrected for the main European launch. Handling is good and it’s very competent at soaking up bumps on uneven surfaces. Thanks to good soundproofing, the cabin is quiet.

With six airbags, the Qoros 3 was rated as the safest small car of 2013 by Euro NCAP, which awarded it five stars.

So the hatch is already competitive, and when the new powertrains arrive, it will be an appealing package, even if it doesn’t stand out visually. It has a quality feel, with solid-closing doors, premium materials for the interior and logos on light clusters. Essentially it’s a German car created in China.